Kali Puts on a Benevolent Face

Story from the Calcutta Telegraph 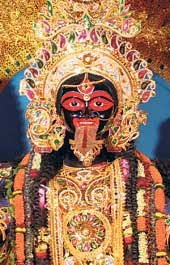 Dark Kali gets a makeover! She sure reminds me of the ancient eye-goddesses! Black destroyer of demons goes true - City pandals turn Kali from fearsome goddess of the moonless night to benevolent protector SUDESHNA BANERJEE October 19, 2009 Goddess Kali has gone from dark and destructive to blue and benevolent. Shyama Kali, the relatively benign avatar of the mother deity, was more conspicuous this Kali puja than her dark-hued twin with fearsome eyes and blood-smeared lips. According to the Kumartuli Mritshilpa Sanskrity Samity, barely 500 of the 4,500-odd idols that were sculpted this year portrayed the goddess in her rudra roop (terrible form). “The number of Kali pujas in town has increased, and so has the demand for idols that show the goddess in a different light. In fact, 90 per cent of the new orders that came to us this year were for Shyama Kali,” Babu Pal, the secretary of the samity, told Metro on Sunday. 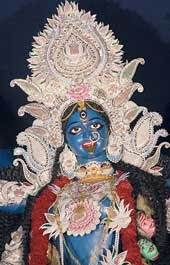 So is the changing face of Kali in pandals just a cosmetic change? “Chardike shudhu khun, jokhom… (There’s blood and wounds all around). People are praying to the mother goddess to be spared the violence. It is easier to seek such a boon from a mother who does not look violent herself,” explained 64-year-old Himangshu Sekhar Chakraborty, the priest in charge of rituals at the Kali puja in Salt Lake’s AB Block. With Shyama Kali so much in demand, the more familiar image of the dark destroyer of evil whom people would invoke on Amavasya (no-moon night) has become a rare sight at baroari (community) pujas. “These days only people who perform Kali puja at home for mannat (blessings) ask for the rudra roop,” said 61-year-old Kumartuli veteran Nimai Chandra Pal. Of the 42 idols he sold this year, only two were of Kali in rudra roop. The evolution of the ferocious goddess to a still destructive but benevolent mother is, however, not a recent one. The best-known description of Kali is as the figure who emerged from the knitted eyebrow of Ambika in the heat of battle with demons. Legend has it that Kali drank blood oozing out of the body of Raktabij, the demon whom Ambika slayed, to prevent each drop from touching the ground and giving birth to innumerable other demons. According to writer Sanjib Chattopadhyay, the goddess in this avatar is the antithesis of what worshippers seeking solace would like to see in these violent times. “Hence the growing popularity of Shyama Kali with a countenance that almost smiles at you, and someone who one can visualise almost as a member of the family,” he added.
Posted by Jan at 5:18 PM