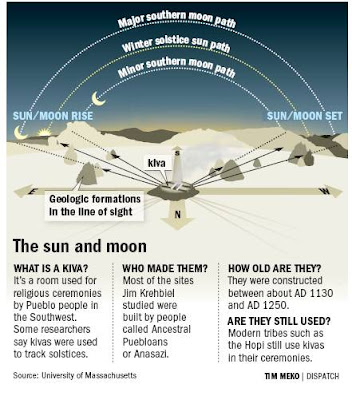 Ohio Wesleyan art professor uncovers celestial connection in desert Southwest Sunday, November 1, 2009 3:40 AM By Doug Caruso THE COLUMBUS DISPATCH Jim Krehbiel was up past midnight making a piece of art by layering maps and field notes onto photos he had taken of an ancient ritual site high on a cliff ledge in the desert Southwest. He looked at the image of the kiva and remembered how the ruins were nearly inaccessible. Krehbiel had to lower himself on a rope to reach them. Why, he wondered that night in the fall of 2007, would anyone build something so important in such a remote spot among the canyons and mesas? It was then that the chairman of Ohio Wesleyan University's art department found himself at the conjunction of archaeology and astronomy. Perhaps, he thought, the site was an observatory; a place to help religious leaders keep track of the solstices, time rituals and plantings. "Their world around them is absolute, total chaos," Krehbiel said. "They were really at the mercy of the elements. "So where do they go for something that's predictable, that remains the same, that you can count on: The sky and the relationship of those things on the horizon." A discussion with Barbara Andereck, a professor of astronomy and physics at Ohio Wesleyan, put Krehbiel on a path that would help him test his ideas about the remote kivas he visited each summer. Krehbiel was stepping into archeo-astronomy, the study of the ways ancient cultures tracked the sky's movements. The science has been gaining acceptance as a branch of archaeology since the 1970s. England's Stonehenge, for example, is well known for its alignments with astronomical phenomena. In Ohio, archaeologists agree that ancient mound builders lined up some works with the movements of the sun and the moon. In the Southwest, the most famous site is the Chaco Sun Dagger. The sun and moon shine through the spaces between slabs of rock to make slashes of light on a spiral carving in conjunction with the solstices and the movements of the moon. But no one had identified such alignments at hundreds of remote ruins that dot the canyons of southeastern Utah. Rest of article.
Posted by Jan at 8:10 PM