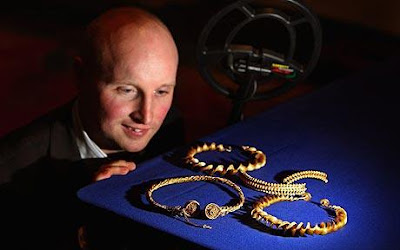 Updated November 4, 2009 to add this photograph: David Booth: The safari park warden parked his car by field in Stirlingshire and made the find after taking just a few paces. Photo: GETTY. From The Guardian.co.uk November 3, 2009 Iron age gold treasure found in Scotland Metal detector finds 2,000-year-old treasure hoard worth an estimated £1m in field near Stirling A metal-detecting enthusiast has unearthed a 2,000-year-old treasure hoard worth an estimated £1m, it was revealed today. Four gold neckbands dating to the iron age were discovered in a field near Stirling by the amateur hunter. The man, who has not been identified, informed Scotland's Treasure Trove Unit which sent a team to excavate the site, the Daily Record reported. The bands, or "torcs", made from twisted gold, are thought to date from the 1st and 3rd century BC. A similar torc found in Newark, Nottinghamshire, in 2005 sold for £350,000. The Scottish Archaeological Finds Allocation Panel will value the latest discovery. A spokesman for the National Museums of Scotland said: "There has been a significant find." Under Scots law, the crown can claim any archaeological objects found in Scotland. Finders have no ownership rights and must report any objects to the treasure trove unit. The man may receive a reward equal to the value of the jewellery. A[n] historian, Fiona Watson, told BBC Radio Scotland: "It belongs to the crown, and the crown – at Her Majesty's discretion – can pay money over to the finder to the market value. I'm sure that is what will happen. "The key question then is what will happen to this remarkable find. Where will it go?"
Posted by Jan at 8:41 PM