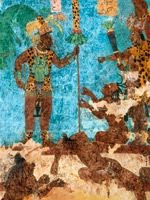 The tomb of a headless man adorned with jade has been discovered beneath an ancient Mexican chamber famously painted with scenes of torture.

Found under the Temple of Murals at the Maya site of Bonampak, the man was either a captive warrior who was sacrificed—perhaps one of the victims in the mural—or a relative of the city's ruler, scientists speculate (interactive map of the Maya Empire).

Whoever he was, "the place of the burial tells us that the person buried there was special," said anthropologist Emiliano Gallaga Murrieta via e-mail.