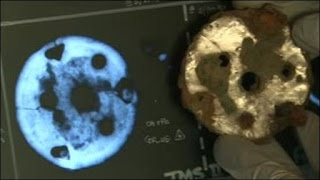 Okay, it's round - it is composed of silver, bronze and wood, it's got holes in it.  What is it?

A Saxon object which was uncovered in an archaeological dig in Kent cannot be identified by experts.

The circular silver, bronze and wooden disk was found in a Saxon burial ground at The Meads, Sittingbourne, in 2008.

Despite using microscopes, X-rays and reading articles about burial grounds, the Canterbury Archaeological Trust (CAT) has been unable to identify it.

CAT believe that the object could be a decorative form of mount as it was discovered next to a sword.

Finds manager of CAT Andrew Richardson said: "We don't currently recognise it, but it may be a decorative mount on something, but we don't know what it's mounted on.

"We'll analyse the wood on the back, to see what sort of wood it is and see whether it was attached to an item.

"We've been trawling thought the literature, and we'll look at its relationship to other finds in the grave and see if we can figure out by looking at the corrosion of objects how it relates to other items."

The disc was discovered with about 2,500 other objects at The Meads burial ground.

The items are currently undergoing a cleaning and identification process at a temporary laboratory in the Forum Shopping Centre by a group of experts and volunteers who have been specially trained.

When I first saw it, I thought it might have something to do with horse tack.  But we weren't given any dimensions in the article -
Posted by Jan at 10:22 PM