Isis has sent me links to several interesting stories this past week - sorry I did not post them last night, I got too involved in watching "Who Do You Think You Are?" and "Kitchen Nightmares."  I just love Gordon Ramsey - minus the vulgarity :)

This first story is absolutely unbelievable - except that it is, unfortunately, true.  Once again Islam demonstrates that it never progressed beyond the Dark Ages - has probably regressed! Disgusting and sad at the same time - killing someone for "telling a fortune" - geez. Talk about a religion with an inferiority complex.  If Allah is the Almighty God, He's not going to be afraid of whatever it is that fortune tellers predict because His Truth will ultimately prevail.  Of course, if Allah is a phoney-baloney god, it's no wonder the Mullahs are upset with the t.v. guy.

In a statement released Thursday, the international rights group condemned the verdict and demanded the immediate release of Ali Hussain Sibat, former host of a popular call-in show that aired on Sheherazade, a Beirut based satellite TV channel.

According to his lawyer, Sibat, who is 48 and has five children, would predict the future on his show and give out advice to his audience.

The attorney, May El Khansa, who is in Lebanon, tells CNN her client was arrested by Saudi Arabia's religious police (known as the Mutawa'een) and charged with sorcery while visiting the country in May 2008. Sibat was in Saudi Arabia to perform the Islamic religious pilgrimage known as Umra.

Sibat was then put on trial. In November 2009, a court in the Saudi city of Medina found Sibat guilty and sentenced him to death.

According to El Khansa, Sibat appealed the verdict. The case was taken up by the Court of Appeal in the Saudi city of Mecca on the grounds that the initial verdict was "premature."

El Khansa tells CNN that the Mecca appeals court then sent the case back to the original court for reconsideration, stipulating that all charges made against Sibat needed to be verified and that he should be given a chance to repent.

On March 10, judges in Medina upheld their initial verdict, meaning Sibat is once again sentenced to be executed.

"The Medina court refused the sentence of the appeals court," said El Khansa, adding her client will appeal the verdict once more.

The case has been covered extensively by local media. According to Arab News, an English language Saudi daily newspaper, after the most recent verdict was issued, the judges in Medina issued a statement expressing that Sibat deserved to be executed for having continually practiced black magic on his show, adding that this sentence would deter others from practicing sorcery. Arab News reports that the case will now return to the appeals court in Mecca.

CNN has not been able to reach Saudi Arabia's Ministry of Justice for comment.


A new King Tut exhibit at the Met --
Tutankhamun's Funeral - A New King Tut Exhibition at New York's Met
Submitted by Ann on Thu, 03/18/2010 - 11:14
In 1908, more than a decade before the discovery of Tutankhamun's tomb, American retired lawyer and archaeologist Theodore Davis made a remarkable discovery. While excavating in the Valley of the Kings in Egypt, he unearthed about a dozen large storage jars. Their contents included broken pottery, bags of natron, bags of sawdust, floral collars, and pieces of linen with markings from years 6 and 8 during the reign of a then little-known pharaoh named Tutankhamun. The significance of the find was not immediately understood, and the objects entered the collection of The Metropolitan Museum of Art as a mystery. It was only several years later, after further excavations and study, that the Museum’s Herbert E. Winlock was able to identify them: the small cache contained the remains from the embalming and funeral of King Tut. These objects now get their own exhibition - Tutankhamun's Funeral - which runs at New York's Met until November 6th.


Wild Horses!  No - not the Rolling Stones' song covered by Susan Boyle and countless other singers -- the real deal - mustangs.  Turns out babies aren't the only ones who respond to rhythms:

Wild Horses Respond to Native American Drumming
Analysis by Jennifer Viegas | Thu Mar 18, 2010 01:44 PM ET
... One sunny afternoon, when they had finished their tasks, the students and a few elders within their group brought a tribal drum to the site, much to the surprise of the instructors and staff. 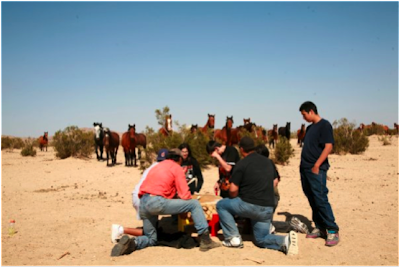 "It seemed to just be a spontaneous happening," Starr told me.

The students sat around the instrument and began to chant and drum.

"When this happened, the horses followed the drums and, mesmerized, made a semi-circle around the students," Starr said. "Most of the kids were so involved in the drumming that they didn't notice, even though the horses had gathered just 12 to 20 feet away. It was so moving that many of us watching were crying." ...
Posted by Jan at 12:19 PM