Ancient "Blue" Back in the News

Prior post - did the old world and new world "blue" hues have something in common?  Use the Goddesschess blog search feature, type in the word "blue" (without the quotes), and a whole bunch of interesting articles will appear to give you background on this fascinating, ancient color.

Was it a case of old knowledge, carefully preserved, being put to use?  Or was it a case of "everything old is new again" and an ancient technology being re-invented/re-discovered in the 12th century by the artisans of the period?

A team of researchers from the University of Barcelona (UB) has discovered remains of Egyptian blue in a Romanesque altarpiece in the church of Sant Pere de Terrassa (Barcelona). This blue pigment was used from the days of ancient Egypt until the end of the Roman Empire, but was not made after this time. So how could it turn up in a 12th Century church? 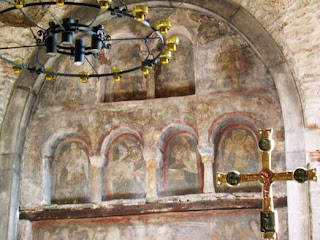 Egyptian blue or Pompeian blue was a pigment frequently used by the ancient Egyptians and Romans to decorate objects and murals. Following the fall of the Western Roman Empire (476 AD), this pigment fell out of use and was no longer made. But a team of Catalan scientists has now found it in the altarpiece of the 12th Century Romanesque church of Sant Pere de Terrassa (Barcelona). The results of this research have just been published in the journal Archaeometry. (Image: Retablo de la iglesia de Sant Pere y sección estratigráfica del azul egipcio. Imágenes: Patrimoni-UB.)
"We carried out a systematic study of the pigments used in the altarpiece during restoration work on the church, and we could show that most of them were fairly local and 'poor' - earth, whites from lime, blacks from smoke - and we were completely unprepared for Egyptian blue to turn up", Mario Vendrell, co-author of the study and a geologist from the UB's Grup Patrimoni research group, told SINC.

The researcher says the preliminary chemical and microscopic study made them suspect that the samples taken were of Egyptian blue. To confirm their suspicions, they analysed them at the Daresbury SRS Laboratory in the United Kingdom, where they used X-ray diffraction techniques with synchrotron radiation. It will be possible to carry out these tests in Spain once the ALBA Synchrotron Light Facility at Cerdanyola del Vallés (Barcelona) comes into operation.

"The results show without any shadow of a doubt that the pigment is Egyptian blue", says Vendrell, who says it could not be any other kind of blue pigment used in Romanesque murals, such as azurite, lapis lazuli or aerinite, "which in any case came from far-off lands and were difficult to get hold of for a frontier economy, as the Kingdom Aragon was between the 11th and 15th Centuries".

A possible solution to the mystery

The geologist also says there is no evidence that people in Medieval times had knowledge of how to manufacture this pigment, which is made of copper silicate and calcium: "In fact it has never been found in any mural from the era".

"The most likely hypothesis is that the builders of the church happened upon a 'ball' of Egyptian blue from the Roman period and decided to use it in the paintings on the stone altarpiece", Vendrell explains.

The set of monuments made up by the churches of Sant Pere, Sant Miquel and Santa María de Terrassa are built upon ancient Iberian and Roman settlements, and the much-prized blue pigment could have remained hidden underground for many centuries. "But only a little of it, because this substance couldn't be replaced - once the ball was all used up the blue was gone", concludes Vendrell.

Of course the people back then were as curious as we are today - perhaps more so because they had nothing to distract them such as 24-7 video, cell phones, text messages, and all the stupid inanity that passes for "culture" today.  Would certain contingents of artisans not have been assigned to work unendingly to discover the secrets of "Egyptian blue?"

And what about medieval potters?  Did they not have blue hues?
Posted by Jan at 10:17 PM