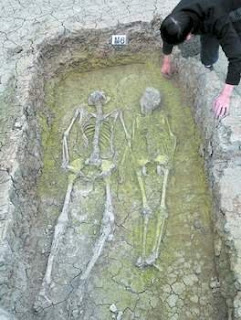 I don't know how I missed this one, but I'm pretty sure I did because I have no recollection of it.  A Shang Dynasty discovery in March, 2010. Hmmm, after re-reading the article this seems to be a rehash of part of a 2004 discovery. But it's interesting. By the way, I do not for a second think these two are lovers - she probably went to the grave most unwillingly, and they certainly were not buried "hugging" each other as the article states!  Perhaps the Chinese have a different definition of hugging???

Loving couples always wish to die on the same day, and a couple who lived 4,200 years ago in the Sanxing Village of Mimou Township, Qingbaijiang District, fulfilled such a wish.

The Chengdu Municipal Institute of Cultural Relics and Archaeology recently discovered an ancient grave during an excavation on a large prehistoric cultural site, in which a couple was found laying and hugging each other. The bones of the "oldest" couple are clearly visible. Excavation work also discovered numerous exquisite stone vessels, porcelains, housing ruins as well as graves dating form China's ancient Shang Dynasty.

In May 2004, the Chengdu Municipal Institute of Cultural Relics and Archaeology excavated part of the site's western side. Archaeologists believe that the Sanxingcun site was once a large ancient settlement in the Chengdu Plain in China's ancient Shang and Zhou dynasties. There have always been settlers on this land over the past 4,000-plus years.

Plenty of porcelains and stone vessels were excavated from the Sanxingcun site, such as flat-bottomed pots and jars with high handles that people in the period of the Sanxingdui culture used to hold items and food. An ivory pottery was found that exactly resembles a bird's head and is engraved with curved lines similar to the lines on the bronze vessels dug from the Sanxingdui Relics. Polished tools–stone axes, chisels, spears and knives still looked very fine and sharp.

By People's Daily Online
Posted by Jan at 10:29 PM