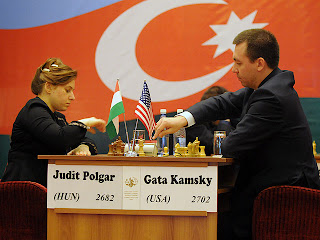 Kamsky defeated Polgar in the last round to move into third place after tie-breaks:

After winning the match against Judit Polgar, Gata Kamski now has 5 points. Shahriyar Mammadyarov was also the winning part of the match against Gadir Huseynov. Shakh was playing with black figures and won after the 30th move and now he is sharing the leadership with Gata Kamski and Vladimir Kramnik. Kramnik won the game, with black figures, against Emil Sutovski. Whites were the winning figures in the match of Teymur Rajabov and Gadir Huseynov. That is how ended the "President Cup" of 2010. Now, because there are three leaders in the tournament, their elo was calculated to determine the winner of the tournament. Vladimir Kramnik is the winner of the tournament for his additional factors. Shahriyar Mammadyarov is following him with the second place, and the absolute leader of the last rounds Gata Kamski is the third in the tournament.