This could fall under "are you kidding me?" except it really happened.  So, ask yourself, who in China can bid over $69 million for a single vase and pay an additional 20% buyer's premium - total price over $89 million. 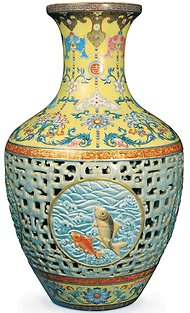 LONDON — As treasure-in-the-attic stories go, the 18th-century Chinese vase sold at a suburban auction house in outer London on Thursday night will be hard to beat.

The delicate, decorative 16-inch vase started at a not-inconsequential $800,000, but after a half-hour of unexpectedly spirited bidding, the gavel fell at $69.5 million. It was the highest price ever paid at auction for a Chinese antiquity.

Adding in the 20 percent buyer’s premium levied by the auction house and Britain’s value-added tax, the total came to $85.9 million. Auction insiders said the buyer was from mainland China and bid by telephone.

Of the sellers, the auction house, Bainbridge’s, said only that they were a brother and sister who had found the vase “in a dusty attic” when they were clearing out the family home in west London, near Heathrow Airport, after their parents died. The other Chinese knickknacks they found sold for as little as $65.

“They had no idea what they had,” said Helen Porter, a spokeswoman for Bainbridge’s. “They were hopeful, but they didn’t dare believe until the hammer went down. When it did, the sister had to go out of the room and have a breath of fresh air.”

The vase dated from the period of the emperor Qianlong, who reigned from 1735 to 1796, at the height of the Qing dynasty. He vastly expanded China’s western territories and left a legacy as a great patron of Chinese arts, including ceramics. Experts who have examined the vase, which bore an imperial seal, have said it was likely to have been made for one of the imperial palaces.

Ovoid in shape and predominantly pastel yellow and sky-blue in color, the vase has a narrow neck, four enameled circular motifs known as cartouches that show colorful fish and flowers, and elaborate perforations in the outer vase that give onto a smaller vase inside. It was believed to have been fired in the imperial potteries in Jingdezhen, in Jiangxi Province, west of modern-day Shanghai, which functioned for 1,000 years as the porcelain capital of China.

Ms. Porter said the sellers had no knowledge of how the vase came to be in their parents’ possession, although they believed it had been in the family since the 1930s. One theory, according to Ivan Macquisten, the editor of Antiques Trade Gazette, a British magazine, was that it could have been among the treasures looted by British troops when they sacked the imperial palaces in Beijing during the second Opium War, from 1856 to 1860.

It was one of Mr. Macquisten’s reporters who found out what little was known about the buyer.

With China’s wealth rapidly rising, mainland Chinese buyers have been a major force in pushing up the prices of Chinese antiquities, reversing, at least in small measure, the flow of Chinese artworks to the West during the centuries before the Communist revolution in 1949 — and the loss of imperial treasures when the Chinese nationalists fled the Communist victory for Taiwan, taking huge quantities of antiquities with them.

The vase’s price exceeded the record for Chinese antiquities set just last month in Hong Kong, when another Qianlong vase sold for $34.2 million.

For Bainbridge’s, the sale price of the vase represented a huge leap, putting the auction house, at least momentarily, in a league with the blue-ribbon art houses like Sotheby’s and Christie’s, where sales running into the tens of millions of dollars have become almost routine in recent decades. Bainbridge’s biggest sale before Thursday was $160,000 for a Ming enamel piece it sold two years ago.

The sale was held in the London suburb of Ruislip, neighboring Pinner, where the vase was found. Pinner is best known in modern times as the place where the singers Elton John and Simon Le Bon went to school.

As the auction house was trying to establish a selling price, Ms. Porter said, the vase had been taken for viewing at the Arts Club in London, where it was deposited for some time on a “metal table next to the kitchen.”

The auction house itself began to realize its rarity only when a consultant on Chinese ceramics, Luan Grocholski, was called in to evaluate it. “Luan took a long, hard look at it and could hardly believe his eyes,” Ms. Porter said.

Still, Bainbridge’s had set its presale estimate between $1.3 million and $2 million.

“We are absolutely stunned,” Ms. Porter said after the auction. “This must be one of the most important Chinese vases to be offered for sale this century. How it reached Ruislip is something we will never know, and that it is in such fine condition is amazing.

“We’re just a very typical local auction house, so as you can imagine it was something of a surprise.”
Posted by Jan at 9:19 PM