As the "go to" person on our email accounts, I gets tons of solicitations from all over the place and I ignore most of them.

But I have to say that this person/company's chess sets are very nice. Unfortunately, this is the only link that came in the email, and it does not lead to a website, only to a photo gallery of some of the items he or his company manufactures or offers for sale.  Most of the photographs that were sent to me were not included at this "address" -- http://cid-506405e1a1f615de.skydrive.live.com/self.aspx/Manoj%20Colection/DSCN2948.jpg  I am publishing a few here. 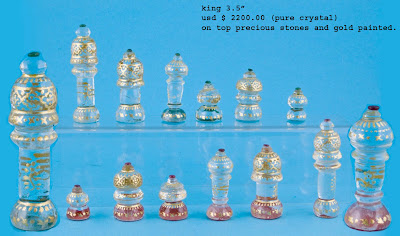 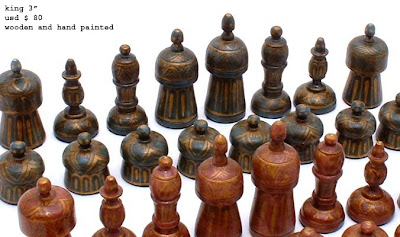 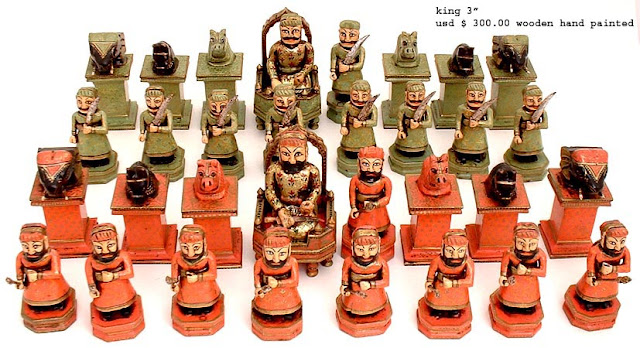 I am particularly fond of the sets where the rook is an elephant's head.  This could represent the howda on the back of an elephant, which was used as a rook in many many Indian sets meant for export to the West over the past couple of hundred years and counting, or perhaps it harks back to the time when the elephant actually was in the rook's position on the board in India, and later switched places with the rook, so that people began to associate the position of the elephant with our western bishop.  I don't know when the switch took place or why it happened, but I do recall reading about it in The Oxford Encyclopedia of Chess of which respected chess historian and writer Ken Whyld was a co-editor, so I figure the information is correct :)  Goddess rest Ken's soul.
Posted by Jan at 4:28 PM