Another dramatic day of play, setting up the ultimate in pressure for the leading players and suspense for the fans tomorrow! 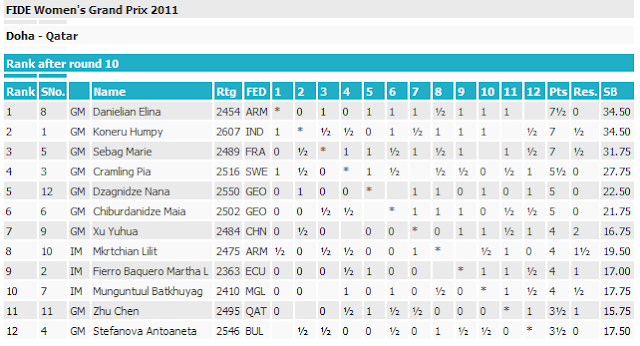 Wily veteran GM Pia Cramling defeated wily veteran GM Elina Danielian, who stayed therefore at 7.5.  However, Humpy won her game against Mkrtchian to gain a point, and GM Marie Sebag and GM Maia Chiburdanidze drew their game.  The top 3 could all lose their games tomorrow and the next closest player, Pia Cramling, can't touch them even if she wins her game.  Mark Crowther at The Week in Chess pointed out that Danielian could opt for a quick draw with Stefanova to guarantee herself a share of first place; if Humpy and Sebag win their respective games tomorrow, all three would then be tied with 8.0.  Danielian isn't under any pressure - she isn't playing for a spot in the matches that will ultimately yield up a challenger for the Women's World Chess Champion title currently held by GM Hou Yifan of China.

That is - if such challenger matches and a new championship match actually take place!  One of the Women's Grand Prix events on the 2011 schedule is still blank and there was nothing on the FIDE calendar last night about a new Women's Championship!
Posted by Jan at 7:04 PM