Okay - is it just me, or does this look like the Mona Lisa with a mustache?  Why is this Christ figure wearing what appears to be a woman's dress???

From The Wall Street Journal Online
Wednesday, June 29, 2011 As of 6:23 AM
By DALYA ALBERGE
A lost masterpiece by Leonardo da Vinci has been discovered in a private American collection and will be unveiled publicly for the first time by the National Gallery in London later this year, according to people close to the institution. 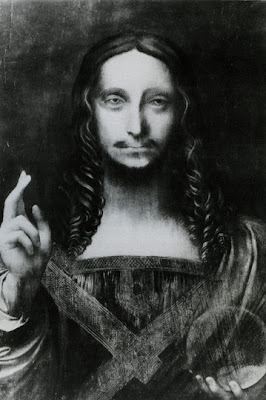 "Salvator Mundi"—a depiction of Christ with his right hand raised in blessing —has been authenticated by experts as the Leonardo painting that disappeared after being owned by Charles I and Charles II of England, according to these people. The last time an important Leonardo was discovered was a century ago.

The National Gallery, which plans a major exhibition on the Renaissance master this fall, declined to comment.

Salvator Mundi—an oil on wood panel measuring 26 inches by 18.5 inches—is a devotional work comparable in size and subject to Leonardo's St. John the Baptist in the Louvre in Paris.

According to a person familiar with the painting's history, restorers began work on Salvator Mundi in the hope that it might be by someone closely associated with Leonardo because of stylistic evidence. Leonardo's hand was confirmed after the removal of layers of discolored varnish and overpaint applied by earlier restoration attempts.

This person said that the idea of finding a lost Leonardo was "not something a rational person would really believe." The composition was known from a 1650s engraving by Wenceslaus Hollar.

The owner's identity could not be learned.

ARTnews magazine, which reported the discovery earlier this week, suggested a figure of $200 million for the value of the painting.

ARTnews reported that the National Gallery's director, Nicholas Penny, invited four Leonardo scholars—including Carmen C. Bambach, curator at the Metropolitan Museum of Art in New York and Martin Kemp, professor emeritus of art history at Oxford University—to the institution's conservation studio. They came away convinced that they had seen an important Leonardo discovery, according to ARTNews.

According to ARTnews, after Charles II's ownership, the Salvator Mundi's whereabouts are unknown until it is recorded in the collection of Sir Francis Cook, a 19th-century British collector, though listed only as "Milanese School (c. 1500)". In 1958, Cook's trustees sold it as by Boltraffio, who worked in Leonardo's studio.

The National Gallery exhibition, which runs from Nov. 9 until Feb. 5, 2012, concentrates on paintings Leonardo produced for Duke Lodovico Sforza in Milan. Loans include "La Belle Ferronière" (Louvre, Paris) and the "Lady with an Ermine" (Czartoryski Museum, Krakow).
Posted by Jan at 7:30 PM