What I absolutely love about this fresco is that the so-called "dead person" is taking center stage in comparison to St. Paul.  That "dead person" also appears to me to be a female.  LOL! 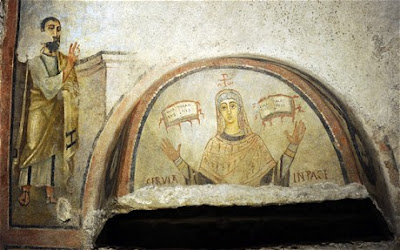 The fresco was found during restoration work at the Catacombs of San Gennaro (Saint Januarius) in the southern port city of Naples by experts from the Pontifical Commission of Sacred Art.

The announcement was made on the feast day of St Peter and Paul which is traditionally a bank holiday in Rome and details of the discovery were disclosed in the Vatican's official newspaper L'Osservatore Romano.

A photograph released by the Vatican shows the apostle, famous for his conversion to Christianity from Judaism, with a long neck, a slightly pink complexion, thinning hair, a beard and big eyes that give his face a "spiritual air."

Cardinal Gianfranco Ravasi, who is Pope Benedict's Culture Minister, wrote in L'Osservatore Romano:"The image of St Paul has an intense expression, philosophical and its discovery enriches our imager of one of the principal apostles."

The figure is dressed in white and beige robes and with the letter 'I' on the hem, which may stand for 'Iesus' (Latin for Jesus) and it shows him approaching a dead person.
Details on the right hand side of the fresco have crumbled away but nevertheless it still remains a striking image which Cardinal Ravasi described as "sensational."

Father Antonio Loffredo, director of the catacombs in Naples, said: "We hope that many locals and tourists will come and look at this fresco which has been wonderfully restored."

Last year another fresco of St Paul was found in another Catacomb in Rome and that was dated to the 4th century AD and is believed to be the oldest image of him in existence.

St Paul was a Roman Jew, born in Tarsus in modern-day Turkey, who started out persecuting Christians but later became one of the greatest influences in the Church.

He did not know Jesus in life but converted to Christianity after seeing a shining light on the road to Damascus and spent much of his life travelling and preaching.

He was executed for his beliefs around AD65 and is thought to have been beheaded, rather than crucified, because he was a Roman citizen.
Posted by Jan at 7:44 PM