Here is a fascinating article from Der Spiegel that further explores and examines a burial discovered in 1877 in the light of recent discoveries from further current excavation of the area surrounding the burial mound.

Here is a drawing/overview of the tomb structure, which was discovered to have been untouched since antiquity when first excavated: 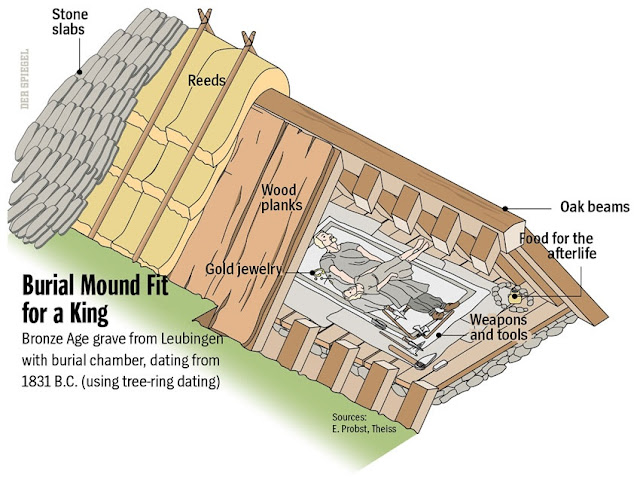 Note the child laid across the man's pelvis, clothed in what appears to be a dress. Does this denote that the child (about aged 10 per the article, below) was a female?

In 1877, when archeology was still in its infancy, art professor Friedrich Klopfleisch climbed an almost nine-meter (20-foot) mound of earth in Leubingen, a district in the eastern German state of Thuringia lying near a range of hills in eastern Germany known as the Kyffhäuser. He was there to "kettle" the hill, which entailed having workers dig a hole from the top of the burial mound into the burial chamber below.

When they finally arrived at the burial chamber, everything lay untouched: There were the remains of a man, shiny gold cloak pins, precious tools, a dagger, a pot for food or drink near the man's feet, and the skeleton of a child lying across his lap.

The "prince" of Leubingen was clearly a member of the elite. Farmers who had little to eat themselves had piled up at least 3,000 cubic meters (106,000 cubic feet) of earth to fashion the burial mound. They had also built a tent-shaped vault out of oak beams and covered it with a mound of stones, as if he had been a pharaoh.

For years, scholars have puzzled over the source of the prince's power. But Thuringia's state office of historical preservation has now come a step closer to solving the mystery. Agency archeologists used heavy machinery to excavate 25 hectares (62 acres) of ground in the mound's immediate surroundings, exposing a buried infrastructure. They discovered the remains of one of the largest buildings in prehistoric Germany, with 470 square meters (5,057 square feet) of floor space; a treasure trove of bronze objects; and a cemetery in which 44 farmers were buried in simple, unadorned graves.

With its unearthed remains of huts and palaces, of humble living next to ostentatious luxury, the Leubingen site provides an example of stark social differences. But the dig also sheds light on the moment in history when mankind lost its economic innocence.

In the Neolithic age, farming communities were still egalitarian because everyone was equally poor. But then came the Bronze Age, which saw the emergence of a privileged upper-class caste of chieftains. They lived relatively luxurious lives, were buried in even greater opulence, and adorned their wives with gold jewelry and amber necklaces.

Archeologists are particularly excited about the cache of weapons they publicly unveiled on Monday. The weapons are still packed in dirt within a ceramic pot. Tests conducted with a particle accelerator have already shown that the pot contains roughly 100 bronze hatchet blades.

This strange practice of burying valuable items is typical for the era. But the reason for doing so remains a mystery. "It's as if someone had buried 100 Mercedes sports cars," says project director Mario Küssner.

The cache was buried directly along the exterior of the recently discovered giant house. Trees as thick as telephone poles were felled to build the 44-meter-long (144-foot-long) house. The roof was covered with reeds or wood shingles and was about eight meters high. The structure apparently never contained livestock.

The Dawning of the Bronze Age

Some scholars have hypothesized that the building was a temple and have interpreted the hatchets as offerings to the gods of the underworld. But Küssner believes the building was the residence of the "prince," who lived there with a group of his minions and extorted duties and fees from long-distance traders.

It is known that merchants brought salt and amber through the region at the time. The trade in bronze, a new luxury material, also flourished. The technology of mixing copper with tin or arsenic to make bronze, which had been developed in the Orient, became widespread in Europe after about 2,200 B.C. For the first time, a hard material was available that could be poured into molds.

The blacksmiths stoked their furnaces with blowing irons and poured the molten metal into their crucibles. Meanwhile, miners searched for ore veins. The raw material was scarce. Caravans brought bars of unprocessed copper from as far away as the Carpathian Mountains and the Alps. Most of the tin came from Cornwall.

Blacksmiths gradually forged harder and harder weapons, better tools and more beautiful jewelry -- but only for those who could afford it. Thus, the world became divided into rich and poor.

A Valuable Location on a Trade Route

Küssner estimates that the "prince" and his guards kept watch over a "radius of 80 kilometers" and profited exorbitantly as a result. He believes that chieftain's gang of extortionists provided the hatchet blades in the valuable cache as a sign of their loyalty.

Another item found in his tomb, a small anvil, suggests that the man had something to do with metallurgy. It is possible that he was a blacksmith himself. But, either way, it is clear that he controlled others through the use of force.

In the end, a child followed him into the grave as a bloody sacrifice. The child was only about 10.

Translated from the German by Christopher Sultan
Posted by Jan at 3:28 PM

This article needs some scientific writing. There is much judgmental language that is frowned upon by scientists, such as "bloody sacrifice" of a child. No facts or reasons for this assumption are given. Also, the wording on the lifestyle (using force etc.) could be improved by using less present-day moral judgment for the description of the difference in wealth and burial technique.