A Rare White Buffalo Born and Whope, The Lakota Goddess of Peace 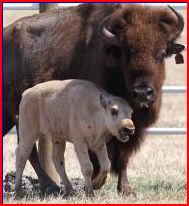 GREENVILLE, Texas (AP) — Thousands of people came from miles around Wednesday to see and honor a legend in the flesh — the white buffalo born in a thunderstorm on a northeast Texas ranch.

The rare white buffalo calf, regarded as sacred by Lakota Sioux tradition, was honored with Native American prayers, religious songs and the solemn smoking of a pipe in a special naming and dedication ceremony at the Lakota Ranch in Greenville, about 50 miles northeast of Dallas.

Flag-flying patriotism, a steady Native American drum beat and scorching heat provided the backdrop for the spiritual event that drew about 2,000.

The calf was named Lightning Medicine Cloud — a reference to the thunderstorm that marked the arrival of his birth as well as a tribute to a white buffalo born in 1933 named Big Medicine.

According to Lakota Sioux tradition, Whope, the goddess of peace, once appeared in the form of a white buffalo calf. Some say the goddess will return once four such calves are born.

But whether the Greenville, Texas, calf was the third of its kind ever born or the first male in 150 years wasn't immediately clear.

But all agreed that the birth of such a calf was unusual and stressed that it was not an albino, given its dark nose, eyes and marking on the tip of its tail. Several who spoke at the ceremony said they considered it a blessing.

"He's the hope of all nations," said Arby Little Soldier, upon whose land the calf was born on May 12. "The red man, black man, white man and yellow man; we've all got to come together as one."

Unity and peace were major themes, as was respect for the environment and the notion that all living things are interdependent.

The white buffalo is an omen that signifies the arrival of hard times unless people learn to change their ways and live in a manner that benefits everyone, including Mother Earth, according to literature distributed at the entrance gate.

"It's the beginning of a new age, new times," said Samuel Joseph Lone Wolf, a Native American elder from Palestine, who played an important role in Wednesday's ceremony. "The birth of the white buffalo calf, it tells us we need to get right, not just with Mother Nature but with all nations and with the Creator, which is God."

Some tourists complained that it was difficult to see much of the ceremony unless one was on the front row. There were no bleachers or big screens upon which events were featured. One white woman, seemingly disappointed by the program's length beneath the hot sun: "I think they're going to keep going until all the pale faces faint."

But another said she was just grateful to be there.

Bonnie Greenwood said she and her husband live down the road and see the buffalo all the time as they drive by.

"We wanted to be sure to be here for this," said Greenwood, who sported a bright orange Buffalo bison T-shirt from her high school alma mater and brought their 9-year-old granddaughter from Oklahoma to also witness the ceremony.

After Little Soldier rode a horse around a corralled area and threw a lance into the ground, making the area as sacred, the crowds surged forward as the small herd of buffalo was let loose with the small white buffalo among them.

To commemorate the occasion, tourists could buy everything from Lightning Medicine Cloud T-shirts and caps, glossy photos of the white bison and even buffalo meat made from Lightning's darker relatives.

Arby Little Soldier and several other leaders are charged with caring for the calf. When Lightning Medicine Cloud turns 2, another ceremony will be held and other prophecies revealed, said Patricia Little Soldier, Arby's wife.

"When do you think you'll get another white buffalo?" 13-year-old Tristen Scott from Virginia asked Arby Little Soldier.

The calf's caretaker sighed as he patiently explained that the odds were against that happening any time soon. "What are your chances of winning the lottery?" Little Soldier said.

On the Net: Lightning Medicine Cloud

Copyright © 2011 The Associated Press. All rights reserved.
Posted by Jan at 8:50 PM