Virginia Site Reveals a Bit of Paleo-Indian Past

A very important discovery and a well-written, engaging article.  Is this the oldest yet medicine wheel uncovered in the United States?

By Edward Leonard on Oct 23 2011
Bear’s Den Rock has captured the attention of travelers in the northern Shenandoah Valley since colonial times and for thousands of years before by the indigenous people who hunted and fished in the region. Now, a local archaeologist believes that the prominent outcrop just south of Virginia’s Route 7 in Clarke County is a part of a larger 12,000 year old celestial calendar used by Native Americans to mark the changing of the seasons.
“Although archaeological sites have been discovered across the United States, there’s nothing like this above ground or this old in North America,” says Dr. Jack Hranicky about the site located just off Ebenezer Road. Hranicky, also known as “Dr. Jack” to friends and associates, is a Virginia Registered Professional Archaeologist (RPA) who has authored 32 books on North America’s prehistory and discovered at least half-a-dozen other Native American solstice sites.
“This preserved site has numerous properties that prove its use 12,000 years ago by Paleo-Indians and classifies it as a major ceremonial and calendar site on the Shenandoah River,” said Dr. Jack “I classify it as an ‘Horizon Observation Station’ which produced a Paleo-calendar for early Americans.”
The story behind the presumed celestial calendar’s recent discovery is, in many ways, as intriguing as its ancient origins.
According to Dr. Jack, 12,000 years ago Paleo-Indians traveled throughout the area known today as the Shenandoah Valley and Piedmont Plateau. Although the Piedmont area provided the early Americans with a nearly unlimited food supply, the first Americans still ventured north and west along the Shenandoah River into areas that include modern-day Clarke County.

“As the Paelo-Indians moved north along the river, Bear’s Den Rocks would have been a very prominent landmark for them,” says Dr. Jack. “They also would have been able to clearly see the site where we are standing right now.”

Dr. Jack is standing in the middle of several large, concentric stone rings – each ring inside a larger ring. The rings were discovered by Clarke County resident Chris White on property he purchased in 2000 located about two miles southwest of Bear’s Den on a lower bench of the Blue Ridge.

Not long after purchasing the property White began building a house on a beautiful rise overlooking his 20-acre parcel.

“When I would come to work on the house, often I would sit by the creek,” White recalled. “A quiet voice inside of me told me ‘This land is important.’”

Despite White’s good feelings about his property, he really had no idea that the land was anything more than just a beautiful spot in a bucolic setting. White’s understanding of just how special his property actually was began changing about two years ago.

Not long after White finished building his house he shifted his attention to longer term thoughts about whether his land could play a role as a Native American Church. For years, White said, he had dreamed of creating a retreat center where all types of people could come to meet and discuss issues that concern Native Americans. To complement his Oklevueha Native American Church of Virginia, White decided to establish the Sanctuary on the Trail, a faith-based neighborhood and community outreach-initiative where spiritual leaders across denominations could meet to create possibilities for communities, churches, and tribes on challenges and issues facing them in a modern world.

So, in 2010 White decided that a good first step toward implementing his Sanctuary on the Trail vision would be to construct on his property what, in Native American parlance, is known as a “medicine wheel.” White even had the perfect location picked for his medicine wheel; the beautiful glen just below his house next to Spout Run.

Medicine wheels, or sacred hoops, are constructed by laying stones in a particular pattern on the ground, often following the basic pattern of a stone center surrounded by an outer ring of stones with “spokes,”or lines of rocks radiating from the center. Originally, and still today, medicine wheels are constructed by certain indigenous peoples of North America for various reasons including astronomical, ritual, healing, and teaching purposes.

As White began clearing fallen trees and brush from his hoped-for medicine wheel site, something extraordinary began to unfold. As White removed debris, pre-existing circles of concentric rocks began to be revealed. As White continued to work, he soon noticed another circular rock pattern next to the first circle.

At first White didn’t know what to think. Could it be that the stone rings were nothing more than a natural anomaly created by some long forgotten rock slide or other random event? Yet certain features of the stone rings piqued White’s curiosity. For instance, why did it appear that larger stones were positioned at cardinal points within the ring? And why were there two rings positioned adjacent to each other?

White, who himself is of Native American heritage stemming from the Cherokee Nation, decided that a professional archaeologist might be able to give him a better idea of whether the rings had been formed naturally or were man-made.

White got in touch with Dr. Jack.

Like any scientist, Hranicky was skeptical at first, but was none-the-less intrigued by White’s find. After some preliminary investigation Dr. Jack decided that the site deserved additional archaeological investigation. With the assistance of Chris and Rene’ White, Hranicky conducted the first scientific excavation uncovering a small five by five foot area at the Spout Run Site that so far has produced jasper tools and other supporting artifacts dating back approximately 12,000 years before present.

While the small pieces of jasper may be important from a science detective’s point of view, the more extraordinary feature from a layman’s perspective is that the ancient solstice calendar appears to still accurately mark the changing of the seasons today just as it must have done more than twelve millenia ago.

According to White and Hranicky, a person standing in the center of the stone rings is able to focus their line-of-sight with one of several large stone markers placed at precise positions in the ring’s outer-most perimeter. The stone perimeter points can then be aligned with prominent landmarks further from the circle – for example Bear’s Den Rocks nearly two miles away.

Based on the stone alignments, Hranicky says, a viewer standing in the middle of the circle will observe the Sun rise directly over Bear’s Den Rocks on the Summer Solstice – the Sun’s furthest apparent northern position. [See diagram, below, from article.] 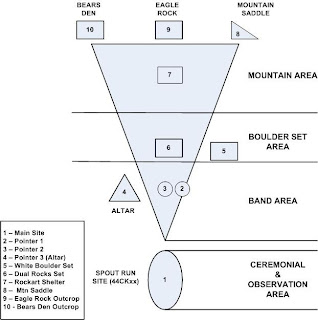 Harnicky claims that a similar Winter Solstice alignment coincides between a stone pillar in the circle and another prominent geologic feature high above on the ridge. Not far from the stone ring is a pile of stones that Hranicky believes may have once served as an altar based on its alignment with other features of the site.

Although on a recent Autumn day Bear’s Den rocks are obscured by the thick leaves and trees, Dr. Jack says that when the stone ring and altar were built some 12,000 years ago there were no trees on the mountain thus giving the Paleo-indians a clear line of sight from the center of the circle to the stone altar and continuing further up the mountain to Bear’s Den Rocks.

According to Dr. Jack, the stone calendar site was probably built not only as a place to hold ceremonies and observe solar positions, but also as a location for jasper tool-making. However, the primary value to the ancient tribes surely would have been in its importance to their survival in predicting the changing seasons.

“The site investigation included mapping and exploring resources around the site and confirms that Paleo-indian priests carried out ceremonies here using the angle of the sun, concentric rings and a stone altar that stands about five-feet tall,” Hranicky said. Hranicky is in the process of registering the site as a state-recognized prehistoric site with the Virginia Department of Historic Resources and as a National Historic Landmark with the U.S. Department of Interior.

Hranicky and the Whites have coined the name “Spout Run” for the prehistoric site after Spout Run stream that winds through the property before making its way further down the mountain and into the Shenandoah River.

Hranicky who believes that Clarke County’s Spout Run Site is the oldest above-ground Paleo-indian ceremonial site in North America, will be presenting his research on October 22 during the Annual Meeting of the West Virginia Archaeological Society in Charleston, West Virginia.

“This prehistoric site located in Northern Virginia is of unique national significance and offers a glimpse into a highly developed culture living in Virginia over 12,000 years ago,” Hranicky said. “The site has above-ground concentric rings, jasper tools, Summer/Fall focus and calendar using the summer solstice as a start for the year.

“Jasper is a cryptocrystalline stone in geology known to be a preferred mineral to fashion tools by Paleo-indians during the Younger Dryers period, which occurred after the Earth returned very quickly into near glacial cold, dry and windy conditions. Dating also corresponds to the length of time that the Paleo-indians mined for jasper at the Thunderbird (Flint Run) Paleo-indian Complex in Warren County” Hranicky remarked.

Thunderbird is a jasper quarry excavated in 1974 by Catholic University’s late William Gardner. Gardner was among the first to uncover evidence that Paleo-indians used the Shenandoah River to reach jasper quarries there.

“Our goal is to seek donations and funds to help preserve the site for future generations,” said Spout Run owner Chris White. “Anyone interested in helping preserve this sacred site can contact White at the Native American Church of Virginia."