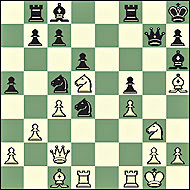 
There is no obvious reason for such a disparity in a purely intellectual game.
One dubious explanation put forward over the years is that women are not as naturally aggressive as men and that successful chess requires frequent attacks. Yet in women-only events, a higher proportion of the games end in decisive finishes than they do at tournaments in which men participate.

That has held true in the current Women’s Grand Prix series. The third tournament, which ended earlier this month in Nalchik, Russia, was dominated by Zhao Xue of China, who won 9 of her first 10 games before finally losing in the last round to her countrywoman Ju Wenjun, who finished second. Zhao’s performance would have set a record if not for that loss.

(Hou Yifan, the women’s world champion, who won the first two Grand Prix tournaments, did not play in the third one because she was preparing to defend her title against Humpy Koneru of India. The match is scheduled to be played in Albania from Nov. 13 to Nov. 30. Coverage will be available at nytimes.com/pages/crosswords.)

In Nalchik, Zhao did not just win most of her games, she won them quickly and often with withering attacks. She got off to a quick start by beating Viktorija Cmilyte, who is from Lithuania and is the European women’s champion.

Cmilyte used a very passive opening, which got her into trouble. Instead of 3 ... Nc6, she should have played 3 ... d5. Then, 4 cd5 Nd5 5 e4 Nb6 would have led to a position in which Black would have been set up to counterattack White’s center.

Zhao’s 8 Nh3 was unusual, but it kept Cmilyte’s pieces bottled up by denying her use of the g4 square.

Though Cmilyte managed to dissolve Zhao’s center after 14 ... gf5, her pieces were still badly constrained. She erred with 22 ... Bh6, though even after 22 ... Nd8, her position would have been difficult.