Genetic Drift Does Not Equal "Evolution"

Here's an example.  Article from The New York Times:


Another Genetic Quirk of the Solomon Islands: Blond Hair

In the Solomon Islands, about 10 percent of the dark-skinned indigenous people have strikingly blond hair. Some islanders theorize that the coloring could be a result of excess sun exposure, or a diet rich in fish. [Aren't they all exposed more or less to the same level of sun exposure?  And don't they all have more or less the same diet?] Another explanation is that the blondness was inherited from distant ancestors — European traders and explorers who came to the islands. [A possible and plausible explanation, but now, thanks to DNA, we know the truth of the matter.] 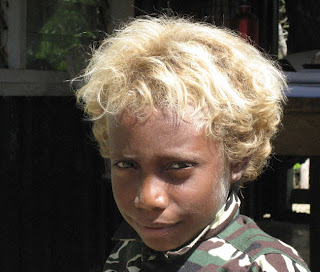 But that’s not the case, researchers now report. The gene variant responsible for blond hair in the islanders is distinctly different from the gene that causes blond hair in Europeans.

“For me it breaks down any kind of simple notions you might have about race,” said Carlos Bustamante, a geneticist at Stanford University. “Humans are beautifully diverse, and this is just the tip of the iceberg.”

Dr. Bustamante and his colleagues published their findings in the current issue of the journal Science. The researcher analyzed saliva samples from more than 1,000 islanders, looking closely at a subset of the samples — from 43 blond and 42 dark-haired islanders.

They were soon able to identify the single gene responsible for the variance in hair color. Called TYRP1, the gene is known to influence pigmentation in humans. The researchers also found that the variant of TYRP1 that causes blond hair in Solomon Islanders is entirely absent in the genomes of Europeans.

“Here you go into an unstudied population with a small sample size and you can really find some cool things,” Dr. Bustamante said. “So what about other places, like what about light pigmentation in parts of Africa? How do we not know the genetic basis of skin and hair pigmentations across the globe?”

He and his team hope to raise more money to further analyze the Solomon Islands data.
Posted by Jan at 10:01 PM