On Auction at Sotheby's: El Nigromante, The Conjurer 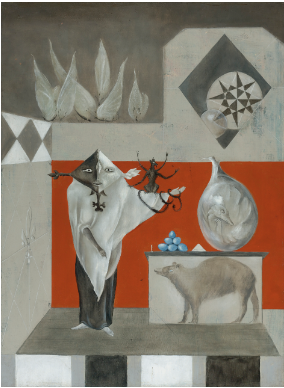 I saw this and I went WHOA!  I cannot seem to take my eyes away from it, but I'm going to try because I want to take a nice long hot bubble bath.  Hmmm, what is that I spy -- the same hand action going on with the "conjurer" as in the "pointing Queen" paintings and sculptures (including chess pieces) of old???  Well, pretty obvious, as is the use of shades of black, white and red.  At least one eight-pointed star, the old Egyptian-style "checkerboard", diamonds (always a girl's best friend and just a cockeyed checkerboard -- one of the first symbols ever put on colored pottery about 8,000 years or so ago, in the highlands of the Iranian plateau), a modified swastiska and a crux, birds galore including doves, the ancient symbol for Sophia (Wisdom) and later on, the Virgin Mother Mary...or are those "tongues of fire?"  A four-armed monkey - Mr. Don is the expert on Hanuman.  A pyramid, an altar, and what is that furry creature underneath (or inside of) the altar?  Could that possibly be the Trickster himself, a Raccoon?  Speaking of which, I chased one up a tree earlier this evening...

I'm sure the longer I look at this painting, the more I'll see!  Here are the particulars: