You Know It's a Slow News Day When...

...the Milwaukee Journal-Sentinel has a SPORTS story on the recently enacted "dress code" of the European Chess Union.  OHMYGODDESS, what is this world coming to?

SPORTS
By Norman Chad, the Couch Slouch (I kid you not, that's what it says)
Chess dress code puts checkmate on cleavage
May 6, 2012

As many of you surely know by now, the European Chess Union has established dress-code rules for chess players.

(OK, some of you don't know - you don't follow chess and you don't think it's a sport. Well, friends, at a minimum, it's "mental sport." And, as far as I'm concerned, Bobby Fischer was every bit the athlete that Michael Jordan was; both were hyper-competitive and ruthless in their pursuits, plus Fischer was a better trash talker.)

Before we detail the dress code - apparently, the bust line has become a problem - as a former non-grandmaster, let me emphatically state my opinion in this sartorial area:

Chess needs a dress code like Switzerland needs a navy. [It seems Mr. Couch Slouch is not familiar with chessplayer Maria Manakova, who has been known to "bare it all" but not, as far as I know, at a tournament -- while playing OTB that is...]

Poker needs a dress code. At the moment, all the twentysomething savants favor shades, baseball caps and hoodies, usually adorned in black. Card rooms these days look like funeral homes, with chips.

Golf needs a dress code. At the Masters, Ian Poulter was wearing plaid pants and yellow shoes; it looked as if Walt Disney had thrown up on him. Who dresses these guys, Grace Jones?

Tennis needs a dress code. When I turn on the TV and see Serena Williams, I'm not sure if I'm watching the French Open or "Project Runway."

Bowling? Actually, those fellas look fine to me.

(Granted, I'm the last guy in the world who knows anything about fashion. At least I have an excuse: I dress in the dark and, for personal safety, I do not have any mirrors in my home.)

I last played serious chess in college; I appeared to be behind from the beginning of every match. What chance did I have, anyway? Those jokers were all perfecting Moscow Variations of their Sicilian Defense while, frankly, I was only in the sport for the ladies.

Nowadays, it seems, the ladies are the problem.

The new dress code covers both sexes, but women appear to the object of the regulators' desires.
Stunningly, plunging necklines are out - only two buttons may be opened on women's blouses.

Which raises the question: Could a comely female distract a weak-minded male with some strategic cleavage? I guess so. Heck, most men get distracted by the smell of bacon.

But Sava Stoisavljevic, general secretary of the European Chess Union, told the German website ChessBase that the new rules had nothing to do with protecting men from themselves; rather, they resulted from spectator comments on female competitors' outfits.

She also said that limits on short skirts might be forthcoming.  (If these rules had been effect in the early 1980s, my first marriage never happens.)

Under the new order, sunglasses and neckties are allowed, hats and jeans with holes are not. High heels are in, flip flops are out.

And the ECU encourages sports coats for men, which would be fine by me. I have a closetful of blazers; in fact, I've slept in a Harris Tweed for years.

In short, Stoisavljevic wants the game to maintain its modesty.  (This likely will thwart Spike TV's upcoming plans for "Strip Chess.")

The ECU rules require "a pulled-together, harmonious, complete look with colors, fabrics, shoes and accessories, for both men and women." What, suddenly this is Goldman Sachs? (Actually, that might be a poor reference - I'm not sure there are any women at Goldman Sachs.)

Stoisavljevic says these rules will restore a sense of decorum; to be honest, I didn't think chess was being overrun by Carrot Top and Lady Gaga.

Anyhow, players not properly attired will get a verbal warning, then a second written warning. After this, a breach in the dress code will send you into the park for your next match.

So far, the chess community has fallen in line; no one's shown up looking like a Chippendale.

Me? I've gravitated back to my sporting roots: Checkers! We wear what we want. 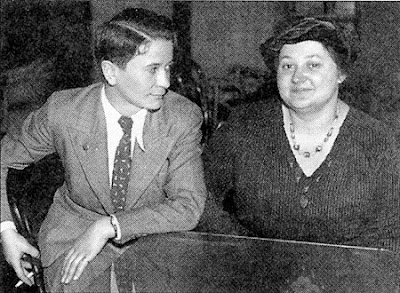 That's Sonja Graf on the left, a German national who played in Europe for many years, sat out WWII in Argentina when that war broke out while she and many other players were in Argentina for a chess olympiad, and after she married and moved to the United States, a two-time U.S. Women's champion.  The other woman is Vera Menchik, the best female chess player in history until Judit Polgar came along.  Menchik lived in England and played for that country until her death in London during a bombing raid in WWII.

Check out their outfits.  Me thinks that neither Graf nor Menchik would pass muster according to today's ECU dress code!  Menchik's dress is far too low cut - no cleavage must be showing, you know.  And Graf - well, she's dressed like a DUDE.  Even her hair is dudey.  Gasp!  In short, she looks like Victoria dressed as Victor (remember the movie Victor/Victoria).  No matter how well in taste her outfit is, and Graf certainly does look sharp in that outfit, I don't think it is within the rules.  Nope.  Women must dress like women, and dudes must dress dudey, and never the twain shall meet OTB.

Here is another photo of Graf taken at the Utrecht Chess Club on October 3, 1936, according to Wikipedia, where I copied it from: 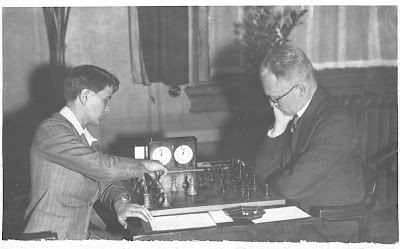 Sonja Graf is the one with the bustline.

Here is a photo of her in a dress and I'm sure that head wrap she has on back then (may have been taken in laste 1950s-early 1960s) would be disqualified today as too distracting (she was not a Sikh). 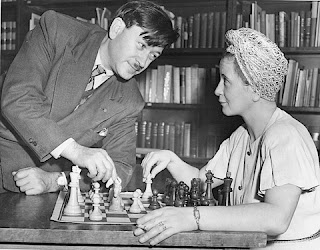 IM Herman Steiner and Graf, playing with a set designed by Steiner.  Details here.
Posted by Jan at 10:10 AM