Hola, darlings!  Happy Women's Day to all of my sisters by gender, wherever you may be. Today, March 8, 2014, women around the world are celebrating and commemorating where we have been, how far we have come, and where we have yet to go in our communal journey living on our beautiful Earth as human beings.

In the image above, ancient Egyptian Priestess, Meretites, and her husband, Kahai, a singer and Director of Music at one of the ancient temples, share a loving moment.  Notice the eye to eye contact and how Meretites is depicted not as a miniature woman at her husband's feet, but as an equal.  It is Meretites initiating the intimacy by placing her arm around her husband's shoulders, her hand resting near Kahai's neck.  This beautiful painting is from their joint tomb, found at Saqarra and dating to about 4,400 years ago.  Women in ancient Egyptian culture had many rights not granted to women in other cultures (sadly, still today in many cultures), including the right to work for pay and keep their own money, the right to own property and to run their own businesses, the right to enter into contracts in their own names, the right to legal process before the courts, and the right to inherit property and devolve their own property to others.

The website for International Women's Day 2014 has a brief history of how this memorial day for women came about.  Celebrations and special events are planned for this day all over the world.  Today, please take a moment to reflect upon the women in your own life, and what your life would be like without them.

Here are some photos from my stash:

Women teach and nurture.  This photo was taken in Chicago in autumn, 2009 at the completion of a "Computer Labs 4 Kids" program, founded by my chess buddy, Shira Evans Sanford:

﻿
Women support each other (rather than compete against each other) in our endeavors to make the world a better place:

Women accept the differences among us with more grace, intuitively understanding that underneath our skins, we are all the same:
This is not to say that men do not also support each other, encourage each other, and form close emotional bonds. Of course they do!  But, we also know that men too often fall prey to or are unrelentingly subjected to cultural restraints and "societal norms" that deter them from experiencing the richest and deepest ties that bind.
Women will fight, fiercely and with no holds barred, when that which they hold most precious -- the lives of their loved ones -- is threatened.   It's motherhood, sisterhood, the unique bond of love among friends, and loyalty, that spurs us on.
Do we fight for ideas?  Sure we do, but I think those "ideas" are usually embodied in abstract form wrapped within someone we love.  Did the Hind of Hinds go out and lead Arab warriors in battle because of blood lust? Did Kahena?  Did Bodicca?  Did "Molly Pitcher"?   Did Mu Lan?  I don't think so.  I believe these women went forth and did what they did, first and foremost, out of deep abiding love for their people and their families.
These days, men are the HIStorians.  There is the occasional woman writer of her/history, whose voice gets drowned out - or censored.  We must always keep this in mind.  Men put their own male gloss over everything.  They see through male eyes, with male sensibilities.  Therefore, what HIStory we know is seen through the lenses of the eyes of men.
This is how a lot of men see (or want to see) us -- well, I don't know a real woman who actually looks like this, but maybe you do: 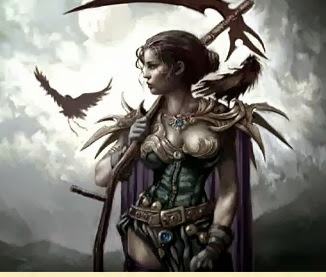 Super big-boobs, impossibly tiny waist, nose too small to actually breathe through, pouty lips, and nice cushy hips to give a male a good soft ride. Oh PUL-LEASE!  In real life, a woman who was built naturally like this (most of us are not) or artificially enhanced (Kim Kardasian, and others come to mind...) would have serious issues walking upright, the natural "bent" being totally tilted (titted?) toward the front.  Ach!  Definitely will suffer back issues and arthritis in her hip and knee joints later in life and will end up with a permanently curved backbone.  This is the equivalent of every man walking around with a 26 inch long, 3 inch diameter penis.
Happy International Women's Day, and ladies, please do carry that image with you in mind for the next several days.  What is that hunched over dude hiding, heh?  What is that man in the baggy Savoy Row suit hiding, heh?  What is the Supreme Leader of North Korea wishing he had, heh?
﻿
Posted by Jan at 2:29 PM