Divination by Reading a Liver 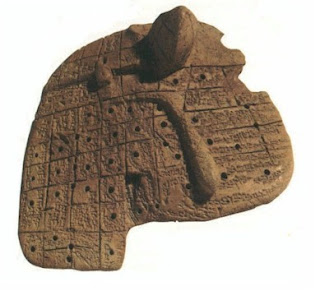 It was the ancient Sumerians and later, the Babylonians, who first tried to determine the answers to specific questions by reading the liver of a sacrificed animal. The graphic is a model of a liver marked with "points" that was used to train student specialists in liver-reading. The practice spread to other areas of the Middle East. The clay model is rather suggestive of a board game, isn't it.

This article about excavation of Hatzor in northern Israel mentions the discovery of some tablets about liver-reading:
A city of stature in days of old
By Ran Shapira
About two weeks before the end of the last excavation season at Tel Hatzor, in July, a clay tablet with hieroglyphic was found. The tablet teaches how to forecast the future with an animal liver, a practice common in the ancient East.

The priests would examine the liver of an animal that had been sacrificed to the gods and use it to predict the future. The tablet found at Hatzor has not yet been deciphered, but its hieroglyphics are reminiscent of the style of early documents from the ancient kingdom of Mari on the Euphrates, in what is today Syria. Mari was an important political center during the Middle Bronze Age, in the years 2000-1500 B.C.E., and Hatzor was the only city in the Land of Israel that had connections with it at that time.

The ties between the two cities were described in 20 documents found in an archive in Mari. The documents from Mari address the importance of Hatzor, the commercial caravans that passed through it, the emissaries sent there and the musicians and singers who lived there. In the 18th century B.C.E., Hatzor underwent a process of expansion and growth. The city was apparently founded at the end of the Early Bronze Age, in the third millenium B.C.E., on the upper part of what is now the tel.

Read rest of article here (a history of Hatzor).
Posted by Jan at 9:17 AM