More Than a Mere Game 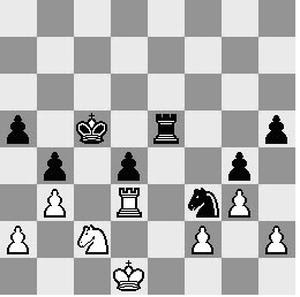 Chess with Errol Tiwari More than a mere game Sunday, September 9th 2007 In an age dominated by religious zeal and ideological fanaticism, the development and promotion of chess is crucial. Chess is a sobering philosophical pastime that transports you away from the exhausting world of violence, confusion and uncertainty. When you face an opponent over the board, you distance yourself in mind from the ugly travails of international conflicts and the extreme difficulties which confront you every day on the home front. The game has a soothing effect on its devotees. It is little wonder, therefore, that it is so meaningful to the powerful, such as CEOs, chairmen, managing directors, ministers of government, prime ministers and presidents, who will keep a chess board and pieces routinely at hand always, to be used when required to assuage the tension caused by belligerents scattered across the globe. For the modern state and its rulers, chess is more than a mere game. It is a weapon that is used by nations to make a statement. If ideology necessarily determines foreign policy, then the Fischer-Spassky World Championship chess match of 1972 was no sunny afternoon tea-party encounter. It was a metaphor for the Cold War. It was the clash of two completely different cultures: one American, and the other Soviet. It was a battle of ideas, political systems and ideologies in the form of an actual chess match waged with great skill, tension and tenacity across a wooden board of 64 squares. We see clearly the interconnection between chess and the conduct of international relations. One news item described Fischer's refusal to play for the championship as "the greatest American disaster since Pearl Harbour." The championship was never about two grandmasters moving pieces and pawns around a chess board. It was about an intellectual engagement, perhaps a confrontation, between the two most powerful nation states in the universe. It was a tactical and strategic mind game between two countries at the height of tensions during the Cold War in which the winner put a stamp on his country's claim to intellectual superiority. Two weeks ago, China stunned the world by defeating Russia in a chess match in Russia. Each country fielded a team of 10 players, male and female, and China prevailed by the handsome margin of 52 ½-47 ½points. Of course, Russia did not field its strongest grandmasters who are preparing to play in the World Championship tournament in Mexico City, but China also did not commit at least one of its biggest names in the game. At the moment, China is engaging England in a similar match with a team of ten also, but this time the Chinese have introduced Hou Yifan, a 13-year-old prodigy who is ranked No 4 in the world among women. Hou, however, will play as a male member of her team and will oppose only male members of the English team. She is being fed a steady diet of tough competition, training perhaps, for full participation among males in a fashion similar to Judit Polgar. In Mexico City, a third world country, India, has the highest ranking among chess-playing nations. Viswanathan Anand has a FIDE rating of 2792, way ahead of the world champion Vladimir Kramnik. Russia, India, Armenia, Hungary and Israel are represented at the tournament which begins on Wednesday. On the local chess scene, the Steering Committee for the Development of Chess has begun preparations for hosting of the country's National Chess Championship. A seven-round swiss system qualification tournament will begin next Sunday to determine 10 players for participation in a double round-robin championship tournament later in the year. This tournament will be played on two successive Sundays at the time control of one hour and fifteen minutes per player per game, and is open to all chess players in Guyana. The committee is currently engaged in a drive to obtain members for the new Guyana Chess Federation. Persons wishing to become members can contact Mr Irshad Mohamed on Tel. 664-1650 and Mr Shiv Nandalall on Tel. 623-7723. Karjakin v Yusupov Sergey Karjakin is a teenage grandmaster who has already defeated world champion Vladimir Kramnik . He is respected for his prowess in sharp positions. In the following game he outplays the renowned Artur Yusupov, a former world title contender, celebrated chess trainer and author. Karjakin plays the endgame flawlessly and forces his opponent into a Zugzwang situation in the end. [Diagram at top] A Yusupov (2583) - S Karjakin (2678) NH Tournament Amsterdam, 2007 1.d4 d5 2.Nf3 Nf6 3.e3 c5 4.c3 Nc6 5.Nbd2 cxd4 6.exd4 Bf5! The move is routine but has a tactical point.7.Nh4 Bg4 8.Be2 Allowing the exchange of Black's problem piece, but if 8.Qb3 Qd6 9.Qxb7 Qe6+) 8...Bxe2 9.Qxe2 e6 Black is very comfortable with his bad bishop exchanged and a slight lead in development.10.Nb3 Qc7 11.g3 0-0-0 12.Bf4 Bd6 13.Bxd6 Qxd6 14.0-0-0 Qc7 15.Nf3 Ne4 16.Kb1 Rhe8 17.Nfd2 Nd6 18.Rhe1 f6! 19.Qh5 g6 20.Qf3 Qf7 21.Nf1 g5 22.Ne3 h5 23.Nc5 b6 24.Nd3 Kb7 25.Ka1 a5 26.Rc1 e5! 27.dxe5 (27.Qxd5 e4 traps the knight) 27...fxe5 28.Qxf7+ Nxf7 29.Rcd1 g4! (Securing an outpost on f3 for knight) 30.Nc1 d4 31.cxd4 exd4 32.Nc2 Nfe5 33.Re4 Nf3 34.Rxe8 Rxe8 35.Kb1 Re4 36.Nd3 Nce5 37.Nxe5 Rxe5 38.Kc1 Re4! 39.Rd3 Kc6 40.Kd1 b5 41.b3 b4 42.Kc1 Kc5 43.Kd1 Re5 White Resigns! 0-1. Final position after 43...Re5. The knight and rook are trapped and 44.Kc1 Re2 wins.
Posted by Jan at 10:03 AM