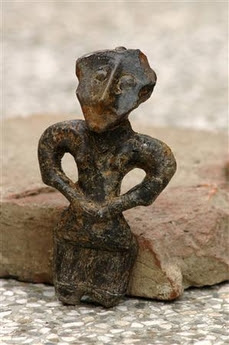 Fashion is as old as art, darlings, going back at least 50,000 years, conservatively. (Recent discoveries of tiny sea shells drilled in such a way as to suggest use in a necklace or bracelet date back to at least 70,000 years ago). So, it comes as no surprise that in the Vinca culture, one of the oldest in "Old Europe" (c. 5500 BCE - 4000 BCE), recent excavations at Plocnik have revealed a Bronze Age female icon in an outfit that wouldn't be out of place today: hip-hugging miniskirt and tight-fitting waist-length jacket with three/quarter length sleeves.
Prehistoric women had passion for fashion
By Ljilja Cvekic
Sun Nov 11, 10:38 PM ET
PLOCNIK, Serbia (Reuters) - If the figurines found in an ancient European settlement are any guide, women have been dressing to impress for at least 7,500 years.
Recent excavations at the site -- part of the Vinca culture which was Europe's biggest prehistoric civilization -- point to a metropolis with a great degree of sophistication and a taste for art and fashion, archaeologists say.
In the Neolithic settlement in a valley nestled between rivers, mountains and forests in what is now southern Serbia, men rushed around a smoking furnace melting metal for tools. An ox pulled a load of ore, passing by an art workshop and a group of young women in short skirts.
"According to the figurines we found, young women were beautifully dressed, like today's girls in short tops and mini skirts, and wore bracelets around their arms," said archaeologist Julka Kuzmanovic-Cvetkovic.
The unnamed tribe who lived between 5400 and 4700 BC in the 120-hectare site at what is now Plocnik knew about trade, handcrafts, art and metallurgy. Near the settlement, a thermal well might be evidence of Europe's oldest spa.
Rest of story.
Posted by Jan at 7:14 PM