"Female Dancer" Mummy Discovered to Be Son of Ramses the Great 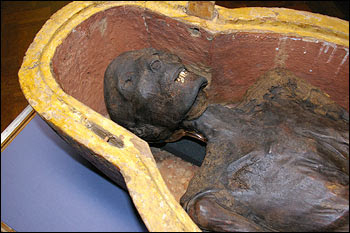 From the Telegraph.co.uk online:

An Egyptian mummy kept on display in a provincial museum for nearly 80 years has been identified as a son of the powerful pharaoh Ramesses II.

The 3,000-year-old relic was thought to have been a female temple dancer, but a hospital CT scan showed features so reminiscent of the Egyptian royal family that experts are 90 per cent sure it is one of the 110 children Ramesses is thought to have fathered.

Tests showed that the mummy had a pronounced over-bite and misaligned eyes, akin to members of the 19th Dynasty, and his facial measurements were found to be almost identical to those of Ramesses himself.

Experts believe that the mummified man died in his thirties between 1295 and 1186 BC of a wasting disease, likely to be cancer.

Chemical analysis also showed that the body had been embalmed using expensive materials, including pistachio resin and thyme, the preserve of priests and royalty. The story of the royal mummy was uncovered by a team from York University who were filmed carrying out the tests for History Channel series Mummy Forensics.

Gillian Mosely, the producer, said: "When the mummy was taken away for analysis we thought we were looking at a female temple dancer, we certainly didn't expect to make a significant discovery like this. It has been a very exciting and ground-breaking process.

"After conducting a series of tests, including a hospital scan, we are 90 per cent sure he is a son of Ramesses, and other evidence suggests he was probably also a priest."

The identity of the mummy, kept at Bolton Museum, Lancs, has been hidden because hieroglyphics on its sarcophagus suggested that it was a female temple dancer.

Was the royal mummy placed in the outer casing of a female dancer many many years later out of sheer expediency? I find this an equally unlikely explanation, as the Egyptian priesthood remained intact until at least 400 CE and retained their knowledge of ancient hieroglyphics and embalmbing techniques! They would not have made such a mistake as to put a royal male body inside a female sarcophagus!

The easiest explanation is usually the correct explanation. In this case, that means that the tomb markings on the outer casing were related to the male mummy within it - a temple dancer.

DNA tests would give us further information as far as confirming whether this is, indeed, a son of Pharaoh Ramesses II.
Posted by Jan at 5:34 PM