"Rimmon" - Pomegranate - Symbol of the Goddess 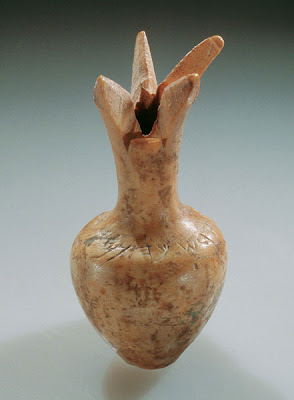 See my prior post regarding the discovery of a carved ivory pomegranate at the Temple in Jerusalem.

From "The Woman's Encyclopedia of Myths and Legends," Barbara G. Walker:

Pomeranate
Rimmon, "pomegranate," was a biblical name of the Goddess's genital shrine (2 Kings 5:18) from rim, "to give birth."(1) The pomegranate with its red juice and many seeds was a prime symbol of uterine fertility. Therefore pomegranates were eaten by souls in the underworld to bring about rebirth. Hellenic mythographers said both Kore and Eurydice were detained in the underworld because they ate pomegranate seeds there. Nana, virgin mother of the savior Attis, conceived him by eating either a pomegranate seed or an almond, another yonic symbol.

The Bible says the pillars of Solomon's temple were ornamented with the female-genital symbols of lilies and pomegrantates. (1 Kings 7:18-20). Solomon himself impersonated the phallic god Baal-Rimmon, "Lord of the Pomegranate," when he was united with his divine bride, the mysterious Shulamite, and drank the juice of her pomegranate (Song of Solomon 8:2).

Hera was Mother Earth, and the suit of pentacles in the Tarot pack represented the earth element. Therefore it is not surprising to find this suit transformed in some medieval packs into a Suit of Pomegranates, the fruit always opened in an oval orifice to show its most red interior.(3)

2 Kings 5:18. A bit of background, this relates to the account of the Syrian general Naaman, who was stricken with leprosy. Naaman's wife was served by a young slave girl - a Hebrew - who said that her God could cure Naaman if he sought out the God's prophet. In due course, Naaman meets with God's prophet, Elisha, who effects a cure of the leprosy. Afterwards, Naaman begs forgiveness for future sins to be committed against the God who cured him of his leprosy - the God of Elisha: 2 Kings 5:18: "However, may the Lord pardon me this one thing - when my maste the king goes into the temple of the god Rimmon to worship there and leans on my arm, may the Lord pardon me when I bow too."

Now if that ain't an interesting exchange, I'll eat my black wool beret! What? Jehovah God forgives a sin before hand - and that sin the WORST POSSIBLE SIN - worshipping in a PAGAN TEMPLE? Oh my!

Notice also the reference to the "god" Rimmon. Well, I guess the guys would have to call the pomegranate after a male, wouldn't they, since the sacred scrolls of the Torah itself are flanked on the right hand side by a scuplture of a pomegranante! I mean, they would never in a million years confess that the symbol was actually female!

1 Kings 7:18-20. Background: talking about the plans of Israelite King Solomon in the construction of the First Temple:

"At the tops of the pillars he (Hiram, the worker in bronze from Tyre who, according to the biblical account, was "half-Jewish" because his mother, a widow, was of the tribe of Naphtali) made two lily-shaped capitals from molten bronze, each 7 1/2 feet high. The upper part of each capital wa shaped like a lily, six feet high. Each capital was decorated with seven sets of bronze, chain-designed lattices and four hundred pomegranates in wo rows. Hiram set these pillars at the entrance of the Temple. The one on the south was named the Jachin Pillar, and the one on the north, the Boaz Pillar."

Well, I guess Hiram wasn't so Jewish after-all. Or the biblical re-writers were trying to pull a fast one on us! Lilies and pomegranates have long been associated with the goddess - there isn't any way around that!
Posted by Jan at 10:07 PM