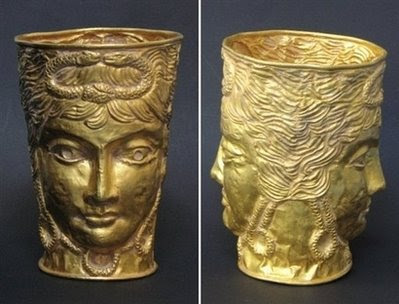 An unbelievable but true story - this priceless cup was once used for airgun target practice! Notice the inter-twined serpents on the foreheads of both faces.

LONDON (AFP) - An ancient gold cup mysteriously acquired by a Taunton scrap metal dealer is expected to fetch some 500,000 pounds at auction after languishing for years in a shoe box under its current owner's bed.

Owner John Webber says his grandfather gave him the 5.5-inch (14-centimetre) high mug to play with when he was a child, back in 1945.
He assumed the golden cup, which is decorated with the heads of two women facing in opposite directions, their foreheads garlanded with two knotted snakes, was made from brass.

But he decided to get it valued when he was moving house last year and was told it was actually a rare piece of ancient Persian treasure, beaten out of a single sheet of gold hundreds of years before the birth of Jesus Christ.

Experts said the method of manufacture and the composition of the gold was "consistent with Achaemenid gold and gold smithing" dating back to the third or fourth century BC.

The Achaemenid empire, the first of the Persian empires to rule over significant portions of Greater Iran, was wiped out by Alexander the Great in 330 BC.

Auction house Duke's, in Dorchester, south-west England, will put the cup under the hammer on June 5, with an estimate of 500,000 pounds.

Webber, 70, told The Guardian newspaper that his grandfather had a "good eye" for antiques and picked up "all sorts" as he plied his trade in the town of Taunton in south-west England.

"Heaven knows where he got this, he never said," he added, revealing that as a child, he used the cup for target practice with his air gun.

* * * * *
The only two-faced god I know of is the Roman Janus. Is this a goddess? Is the cup a cult implement of some kind or was it used in worship? Is it purely a decorative object, a wine cup? Is there significance to the two faces? What does the entwined serpent emblem on the forehead of each face mean? Are there any other artifacts like this one published in any museum or collector's catalog? So many questions - and no answers!
Posted by Jan at 12:54 PM

Thanks for the link.

A goddess with two serpents.