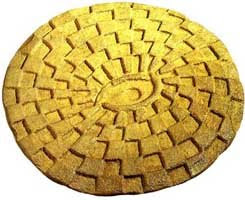 Mehen was both a goddess - the protector of Ra - and one of the earliest known board games played in Egypt. (Image: Mehen, British Museum, c. 2800 BCE). While online you'll find many references to Mehen as a "god," in her archaic form Mehen was definitely a female protectoress of the Sun God, perhaps closely allied with (or perhaps, an incarnation of or subsumed into) the Egyptian serpent-goddess and protectoress of Pharaoh, Uadjet. Upon the uniting of Upper and Lower Egypt, the vulture goddess Nekbhet of Upper Egypt and the serpent goddess Uadjet (also known as Buto) of Lower Egypt were united in one of the ceremonial crowns worn by Pharaoh to protect the physical incarnation of Ra on earth.

Stone Mehen board games have been recovered from First Dynasty Egyptian tombs but it's origins lies somewhere in the pre-dynastic period. The game gradually lost favor over the ensuing thousand plus years after the founding of the united Egyptian kingdom and ceased to be played in Egypt during the Intermediate Period. According to Peter Piccione, "Later in the Saite Period, the play of the game is again depicted on the walls of two tombs, as part of the neo-Memphite revival--when Old Kingdom artistic motives and themes were temporarily revived for socio-political purposes. The pattern strongly suggests that the *mehen*-game ceased to be played in Egypt after the Old Kingdom."

By that time, Senet and the 58-hole game (or Hounds and Jackals) were very popular in Egypt and Senet had taken on religious significance and mystical connotations that may have been appropriated from Mehen.

A form of Mehen evidently continued to be played by the Baggara Arabs of the Sudan called "the Hyena game." The modern "Game of the Goose" which also employs a spiral playing board is not, however, related to ancient Mehen.

For general information on Mehen:
P.S. Neely's website entry on Mehen (including post done by Peter Piccione in 1994 on the old ANE network)

See also Board Game Geek, although it really is not known just why Mehen ceased to be played in Egypt, Neely's speculations (based on Kendall's) aside.

Mehen the Enveloper from Barbara Walker's "A Woman's Encyclopedia of Myths and Secrets:" Egyptian serpent-goddess who enclosed the Phallus of Ra every night, as Hindu phallic gods were enveloped in their sleep cycles by the serpent-goddess called Infinity. See Serpent.

Walker's entry under "Serpent" is 7 pages long! There's a thunderstorm going on here now, I'm going to power down for the night -
Posted by Jan at 9:29 PM