The Kings of New York 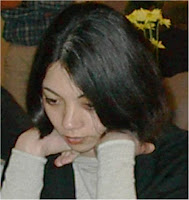 From Michael Weinreb's The Kings of New York, this is from the chapter "The Women in the Room." (The photo is 2003 U.S. Women's Chess Champion Anna Hahn, from an event in March, 2002.)
Anna Khan was sixteen years old and the reigning women's chess champion of Latvia when she enrolled at Murrow High School, the latest pubescent prodigy to arrive in Brooklyn from a distant corner of the crumbling Soviet empire. This was in 1993, ten years after Eliot Weiss founded the school's chess club and a few months after it won its first national championship. And for reasons entirely beyond Weiss's control, Anna Khan was the first female ever to compete on his traveling team.

Anna Khan would lead Murrow to two more national championships, in 1993 and 1994. Eventually, after changing her name to Anna Hahn, she won the U.S. Women's Championship in 2003 and earned the title of WIM, which is the abbreviation used for a "Women's International Master," a less stringent title than "International Master," and one that many of the best male players in the world deride as a second-class designation. On a Web site that archives past games from top players, the comments under Hahn's entry and photograph are a catalog of puerilities ("Anna Hahn can mate me any day. Growl.") But then, this is the way it has always been. Since the inception of competitive chess, the upper eschelons of the game have reeked of sexism, and women who dare intrude upon this sanctity are often treated with as much subtlety as if they'd wandered into the back room at Scores. "Guys aren't going to stand around and watch a guy's game because he's a guy," Bruce Pandolfini says. "Maybe if he's Bobby Fischer, but not for any other reason. But that's not why they stand around women. And if they say it's for any other reason, they're lying."

Forty-five years earlier, when a U.S. women's champion named Lisa Lane drew a sudden barrage of media attention (she was on the cover of Sports Illustrated, and was profiled in Newsweek and The New York Times Magazine, which described her as "comely" and "shapely"), Fischer, an equal-opportunity bigot, dismissed her and her entire sex with a barrage of insults. "They can't concentrate, they don't have stamina, and they aren't creative," he said of female chess players. "They're all fish." And that attitude didn't cease with Fischer: in 2002, Garry Kasparov told the Times of London that "chess is a mixture of sport, psychological warfare, science, and art," and that "when you look at all these components, man dominates. Every single component of chess belongs to the areas of male domination."

Of the top players in the world, only one, Hungarian Judit Polgar, is female, and fewer than ten of the world's 950 international grandmasters are women. [This information is somewhat dated.] Some efforts are being made to alter this: in recent years, Kasparov's own foundation has sponsored an all-girls national championship. But there remains a consensus among many of the best male players that this imbalance exists for a reason, that women are not wired for chess in the same way as men, that they they are, by nature and through societal pressure, more social creatures, and that they would prefer to interact with others than be locked in a room by themselves, poring over esoteric middle-game theory. Which is why most of these girls, when they reach the age of twelve or thirteen, an age that Bruce Pandolfini calls "crucial" to one's development as a chess player, simply fade away. Which is why approximately ninety-seven percent of competitive chess players in the United States happen to be male.

Of the thirty-five participants in the high-school varsity section at the city championships, two were girls. One of them was Anna Ginzburg, who came up through the Chess-in-the Schools program and landed one of those coveted spots at Stuyvesant High School. Ginzburg wears wire-rimmed glasses and has a tangle of thick brown hair and a penchant for feminine accessories, like her "Mrs. Affleck" tote bag. On the back of her Chronos digital clock, she's written her name in permanent marker, dotting the I with a flower and underlining the whole thing with a feminine flourish. when she was younger, she was painfully shy, but now she's gotten used to it, to being out-numbered and overlooked. At times, she is able to assimilate into this boys' world, beating them at cards and surprising them over the board and returning their banter when necessary. (Anna's rating is 1656, about the same as Oscar's whom she defeated at cities after an overconfident Oscar hung a rook). But the worst part, she says, is that when she travels to tournaments, she has so few people with whom she can share a hotel room. In that sense, she is very much on her own.

Because there is such disparity in numbers, the women who break through to competitive chess, the women who can manage to thrive amid a sea of testosterone, tend to be unique and forceful personalities. Some, like Elizabeth Vicary, admit that they thrive on the attention (one Russian women's GM, Alexandra Kosteniuk, has posed for so many risque photo shoots that she's been called "the Anna Kournikova of chess"). [Actually, Kosteniuk is a GM who just happens to be a woman]. Many say they've never felt discriminated against, and that if anything, it's just the opposite: men are so deferential, so cowed by their presence, that their brains often seize up and start melting when they play. Adults turn into randy adolescents. They make silly moves they would never make against other men, and when they are called on these things, they attribute their carelessness to the sex of their opponent: Against a man, I would never make such a move. "In most games, I am thinking about girls for fifty to seventy-five percent of the time, another fifteen percent goes to time management, and with what's left over I am calculating," grandmaster Alex Shabalov once admitted to Jennifer Shahade, the strongest female player ever to be born in this country.
* * * * * * *
I'll bet Shabalov never figured those words would be immortalized in such a way. Har! Oooohhhh, Alex, Mr. Ladies' Man.
Posted by Jan at 3:52 PM