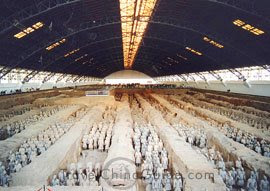 Temples, ancient pieces of pottery and the famed Terracotta Warriors were among priceless cultural treasures damaged or destroyed in this month's earthquake, state press reported today.

One of those severely damaged was the 2000-year-old Erwang Temple, in the same area as the UNESCO World Heritage-listed Dujiangyan irrigation system, which also suffered some impact, Xinhua reported.

The temple was built to honour two ancient kings and was until the quake a popular tourist destination.

A further 239 relics were severely damaged in the neighbouring provinces of Shaanxi and Gansu as well as in the Chongqing Municipality, Xinhua said, citing China's Cultural Heritage Administration.

Tong Mingkang, the administration's deputy head, said experts from all over the country would gather in the affected areas to help restoration work.

"Relics restoration in the disaster area is at the top of our agenda for our bureau in the coming several years," Tong was quoted as saying.

A team of 20 leading experts was already assessing the damage, Xinhua said.

In Shaanxi, to the north-east of the quake zone, seven of the world-famous Terracotta Warriors sustained minor damage and were among 41 precious cultural artefacts affected, according to the Beijing News.

The discovery of the more than 2000-year-old Terracotta Warriors, buried along with China's first emperor, counts as one of the great archaeological sensations of the 20th century. There are an estimated 8000 warriors.

The earthquake cost the lives of more than 68,000 people, according to the latest official toll, making it China's worst natural disaster in a generation.