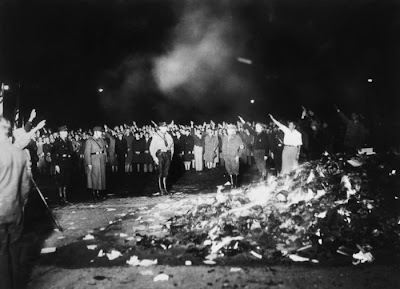 Your comment re Sarah Palin as a book burner has already been proven to be a lie. You may want to revise your post.

You have a great website, and it's a shame to degrade it with a lie.

The animosity and lies regarding Sarah Palin has been one of the more disgusting aspects of the 2008 election season.

promethea, if it's a "lie" - please either cite your evidence or give a link to a website or websites that does cite evidence. Otherwise, I stand by my original comment - that Palin wanted to ban certain books from the Wasilla Library because she didn't like what was in them. Whenever people cannot adequately defend their positions on issues, the first thing they want to do is take away other people's rights to access to ideas with which they do not agree. This is a time-honored modus operandi for Facists and fundamentalists of all stripes. Stop the free flow of ideas and information. The Russian government under Putin has managed to do this very well - and as a result the majority of Russian citizens now think that the people of the United States are their enemies, when nothing could be further from the truth. It is a deadly serious thing to deny access to information to people, just because you don't like the "message."