The DailyGrail.com reported on this today, from Philip Coppens' website: September 29, 2008 A small pyramid for science, a big discovery for the Bosnian Pyramid (from Road News) 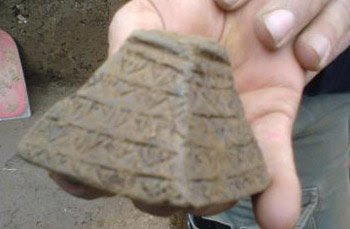 An archaeological site in Donje Mostre, in the Bosnian Valley of the Pyramid, has unveiled a Neolithic artefact that has been dated to 6000-3000 BC. The discovery was made by students of the German University of Kiel on September 23, and was announced by Zilke Kujundžic, who is actually one of the main opponents to the pyramid project, having filed numerous petitions for the work to be stopped, claiming the entire project is a hoax. (Image from article). We need to specify she actually labelled the object a pyramid. The small ceramic pyramid – in some reports also referred to as a benben stone, because of apparent visual similarities with such stones in Egypt – is a major discovery, showing that local people, millennia ago, created ceramic objects in the shape of a pyramid. One can only wonder why, noting that Donje Mostre is also the location where giant rectangular stone blocks have been found, some of which are definitely manmade. Nevertheless, being the extreme (one might argue irrational) critic she is, Kujundžic has refused to admit she might be wrong, stating that the find is “not related” to the nearby pyramids. Meanwhile, Kujundžic was also accused of not having shared the discovery with the local Visoko museum. It is no doubt divine irony that some of the best archaeological evidence for the reality of the pyramids, has been unearthed by one of its fiercest opponents.
************************************
Hmmmmm... I'm all for a more serious effort to investigate and excavate the "pyramid" shaped hill in Bosnia. On the other hand, showing us an artifact like this is distinctly NOT helpful, not even when publicized by Philip Coppens. First of all, assuming this artifact is not a fake plant, it's pretty damn obvious from the photograph that it was scrubbed clean. Sacrilege! Second, no word at all about it's relative dimensions, although we can see it's about hand size - but who's hand? Third, what are those imprints? Is that writing? Art work? If it is writing, what kind of writing? What the hell does it say? Any guesses? Fourth, no link was given to a press release in the Bosnian press or a linked citation to a place where we can find further information on this object. Where was the announcement made? On e-Bay? Fifth, the photo is blurred. I cannot help but wonder whether that was done on purpose! Sixth, why the 3,000 year spread in the age of the object? Surely the initial field reports could narrow down this date range by an examination of the strata surrounding the excavation. Ridiculous! This kind of flash and tease stuff does not help people interested in advancing a serious inquiry! Now, about ben ben stones, here's a quick summary from Wikipedia: 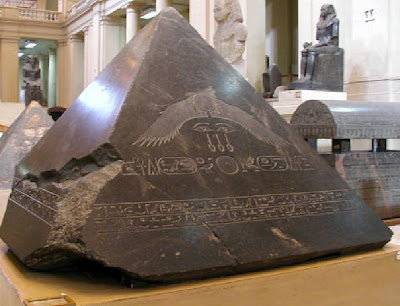 The Benben stone, named after the mound, was a sacred stone in the solar temple of Heliopolis. It was the location on which the first rays of the sun fell. It is thought to have been the prototype for later obelisks, and the capstones of the great pyramids were based on its design. Their tips (pyramidia) were probably gilded. The phoenix, the benu bird, was venerated at Heliopolis, where it was said to be living on the Benben or on the holy willow. According to B. Kemp the connection between the benben, the phoenix and the sun may well have been based on alliteration: the rising, weben, of the sun sending its rays towards the benben, on which the benu bird lives. Utterance 600 of the Pyramid Texts speaks of Atum as you rose up, as the benben, in the Mansion of the Benu in Heliopolis (Hart, p.16). (Image from Paradigmshift, which has some interesting commentary and comparisons between the ancient Egyptian imagery and ancient Indian imagery of the creation myth; the stone is identified as a capstone found at Dashur and said to have been the capstone of the Bent Pyramid, no provenance given or where the photo was taken).
Posted by Jan at 7:58 PM