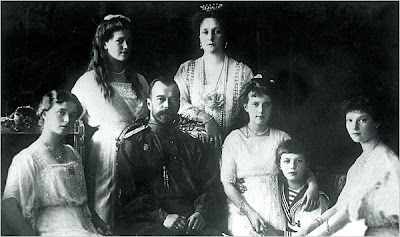 Hmmmm, interesting. I wonder if this is a Miniputin move that may come back to bite him in the butt (along with the ill-advised invasion of Georgia). How do they KNOW relatives of the Romanovs won't file suit for reparations against the war crimes committed by the Bolsheviks, the benefits of which have flowed to the neo-USSRists? Stay tuned... (Photo: The Czar and his family, 1914). From The New York Times Court Rehabilitates Status of a Czar and His Family By MICHAEL SCHWIRTZ Published: October 1, 2008 MOSCOW — Russia’s Supreme Court ruled in favor of full rehabilitation for Russia’s last czar and his family on Wednesday, officially recognizing the Romanovs as victims of “unfounded repression” 90 years after they were executed. The ruling is the latest step in Russia’s post-Soviet reinterpretation of history, which has seen a new embrace of a monarchy once castigated for brutality and backwardness, accompanied by both nostalgia for and damning reconsiderations of seven decades of Soviet rule. Soviet historians constructed accounts that emphasized blaming Nicholas II, or “Bloody Nicholas,” for famines, wars and social collapse. But as Russian nationalism has strengthened after the fall of the Soviet Union, Nicholas has increasingly been depicted as a thwarted visionary and a beacon of the Russian Orthodox faith. The church, which sanctified the Romanovs in 2000 and was itself persecuted in the Soviet era, welcomed the court’s decision. “It is an important step to remove from our history the heavy burden of this crime against the czar’s family,” said the Rev. Vsevolod Chaplin, a church spokesman. “In one way or another the perceptions of society toward Nicholas II and his family are changing,” Father Chaplin said. “More and more people are becoming free of the sharp clichés that were imposed in the recent past.” In its decision on Wednesday, the court reversed a ruling of last November, when it decided that the Romanovs were not eligible for rehabilitation because their execution was a criminal act, not one of political repression. The new ruling “recognizes their unfounded repression and rehabilitates the members of the royal family,” said Pavel Odintsov, a spokesman for the court. “This is a final decision,” he added. In July 1918, under Lenin’s orders, the czar, his wife, Aleksandra, and their children, Olga, Tatyana, Maria, Anastasia and the 13-year-old heir to the throne, Aleksei, were shot to death in the basement of a house in Yekaterinburg, a city in the Ural Mountains in central Russia. Several members of the family’s staff were also killed. The killings by the Bolshevik government were meant to solidify its hold on power in the midst of an intensifying civil war. The Romanovs’ bodies were likely doused in acid to mask their identities before being buried in secret graves. The remains of Nicholas and Aleksandra and three of the five children were discovered in 1991 in the waning days of the Soviet Union, and interred in 1998 in St. Petersburg, in a special chamber in the Cathedral of Saints Peter and Paul, where many other Russian royals are buried. The remains of the two other children were missing until August 2007, when an archaeologist in Yekaterinburg unearthed bone fragments not far from where the other Romanovs had been buried. The authorities announced this year that DNA testing had confirmed that the remains belonged to Aleksei and Maria. Other members of the royal family had been posthumously rehabilitated. In 1999, four Romanov princes killed by the Bolsheviks, including the son of Aleksandr II — the Russian czar blown up by revolutionaries in 1881 — were found innocent of criminal wrongdoing. In July, thousands of Russians took part in events to mark the 90th anniversary of the family’s execution, and calls for the restoration of the monarchy can be heard despite today’s Kremlin-managed political landscape. The ruling Wednesday seemed to echo that nostalgia. “This decision shows the supremacy of law and the victory of justice over evil and tyranny,” said German Lukyanov, the lawyer for Grand Duchess Maria Vladimirovna, a Romanov descendant who first filed a suit for the rehabilitation three years ago. Mr. Lukyanov said that in the coming months he would file suits on behalf of other Romanovs who had yet to be rehabilitated, including the czar’s brother, Mikhail, and several other members of the dynasty. It is still unclear why the Russian government took so long to rehabilitate the czar. Some have suggested Russia’s current leaders feared that Romanov descendants would seek to reclaim property confiscated by the Bolsheviks, while others have speculated that recent leadership changes in the country could have played a role. Yet, past decisions — including the earlier rehabilitation of those responsible for organizing the family’s execution — are less important than what comes next, said Edvard Radzinsky, a Russian historian and the author of “The Last Tsar: The Life and Death of Nicholas II.” “We have two graves that symbolize the revolution: the dirty hole into which the Romanovs were thrown, and the mausoleum of the one who ordered this,” Mr. Radzinsky said, referring to the red pyramid on Red Square that houses Lenin’s preserved body. “The closing of the first grave,” he said, “should lead to the closing of the second.”
***********************************
If you believe in a grand overarching conspiracy theory, then settle in for a long haul yet. The "royals" - descendants of the kings and queens of old, can afford to play a game of wait and see/cat and mouse. Russian politicians will come and go, and so will political systems, but the royals remain forever...
Posted by Jan at 7:45 PM