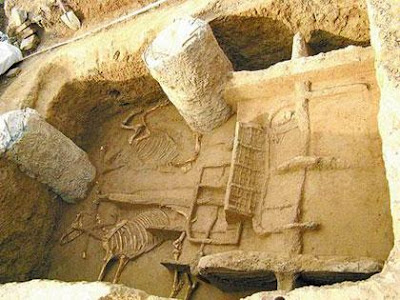 From cctv.com Chariot and horse burial chamber excavated in Henan Source: CRI 02-19-2009 08:52 The excavation of some Eastern Zhou period tombs that had ancient chariots and horses buried underground has been completed, an official from Luoyang's cultural relics office told Dahe Daily on Tuesday. This is another latest uncover of ancient tombs following similar discoveries in surrounding areas in 2002. The excavation site contains 29 tombs, including two imperial wooden chariots and two dead horses. Field work for this excavation began in August 2008 and took archaeologists three months to finish. Many artifacts such as pottery, bronze weapons and jade were found despite the fact that most of the tombs had already been plundered by grave robbers. The horses, laying back to back in an orderly arrangement, were evidently killed before the burial. The two wooden chariots had rotted away, leaving only dusts. According to local archaeologists, this is also the first time a burial chamber with two horses and two chariots has been discovered in the Luoyang region. The chamber is located beneath a restaurant undergoing renovation. The restaurant, Luoyang Jujia, plans to encase the burial chamber in an underground culinary museum.
Posted by Jan at 11:14 AM