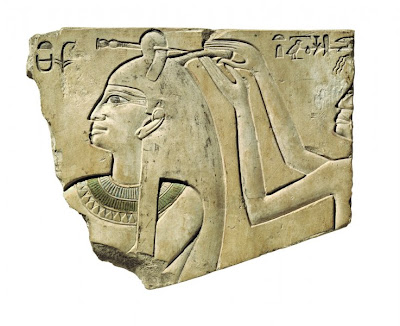 From Columbus Local News Art museum takes wraps off ancient Egyptian 'treasures' * Demetrios the mummy highlights the collection of artifacts on display at the Columbus Museum of Art this weekend through June 7. By EILEEN RYAN Published: Monday, February 9, 2009 9:17 AM EST (Image from Columbus Museum of Art Exhibition Gallery: Queen Neferu having her hair done) Ancient Egyptians who sought to defeat death by surrounding themselves with objects to protect them in the next world could hardly have imagined what form their immortality would take in this one. They'll live on at the Columbus Museum of Art's exhibit "To Live Forever: Egyptian Treasures from the Brooklyn Museum," which opens Saturday, Feb. 14. The exhibition includes objects that range in date from 3500 B.C. to A.D. 100. It includes stone and wood sarcophagi, amulets, stone sculpture and statues, canopic jars that were used to store the body's major organs, two dog mummies and a human mummy named Demetrios. Along with his mummy is a portrait of Demetrios, allowing visitors to see how he looked when he was alive. "It's really quite impressive to have this mummy who's named," said Dominique Vasseur, the museum's curator of European art. Preservation of names was important, as well as preservation of bodies, because of the spells that protected ancient Egyptians in the afterlife, he said. "Your name was important, and the fact that we know the names of these particular coffins -- there is the idea that they are alive, at least in our minds." The exhibition "is really about the afterlife and the tomb and the procedures and processes an Egyptian would go through to guarantee life in the afterlife," Vasseur said. "To Live Forever" is divided into four sections that will show visitors Egyptian beliefs about the afterlife, including papyrus fragments of the Book of the Dead; the mummy; the tomb and the objects that were placed in it; and how those objects would have differed from the tomb of a wealthy Egyptian to that of a one who wasn't wealthy. The painted wooden sarcophagi may be the most fascinating items in the exhibit, Vasseur said, "just in their scale and in all the visual information that is painted on them." Children, especially, are going to be amazed by the mummy itself, he said. "It's not too often you actually have a person and you know they're in there." "To Live Forever" gives Central Ohio residents a rare opportunity to experience such a fine collection of Egyptian art, Vasseur said. "Egyptian culture fascinates us because, in one respect, it seems so understandable," Vasseur said, though it is essentially an extinct culture. "It had a formative nature on subsequent cultures. A lot of underpinnings of our own world and belief system came out of Egypt." Residents can fuel their undying fascination with ancient Egypt until the exhibit closes June 7. Admission to the exhibit is $10 for adults; $8 for seniors 60 and older and students 18 and older; $5 for children ages 6-17; and free for museum members and children 5 and younger. For more information, call 614-221-4848 or visit the Web site columbusmuseum.org.
Posted by Jan at 3:27 PM