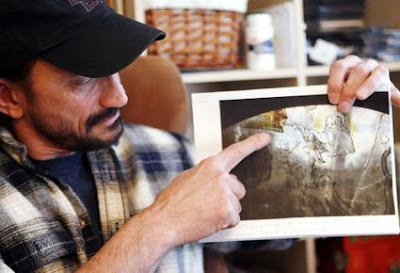 Not sure what to make of this. If it's true, it would be an amazing discovery, but chances are the Solomon treasure was melted down long long ago and this fella is just trying to cash in on Dan Brown's popularity (a new novel is rumored to have been completed and will soon be published) and the public's never-ending fascinating with treasure mysteries. (Photo: Tim Correira/The Enterprise - Mike Bishops points to the "locking rods" on a photograph of the mysterious stained glass window he says he discovered) From Enterprisenews.com Brocktonian claims discovery of religious artifact Brockton man claims stained glass may unlock religious discovery By Maria Papadopoulos ENTERPRISE STAFF WRITER Posted Feb 10, 2009 @ 03:04 AM Last update Feb 10, 2009 @ 03:15 AM BROCKTON — Retired New York City firefighter Mike Bishop says he was in a firehouse in Staten Island in 1995 when he saw the first signs of what would become his religious adventure across France. The copy machine at work had malfunctioned, and an image similar to Jesus’ face on the Shroud of Turin came out of the machine, Bishop said. When Bishop hit the copy machine button again, a second image came out, similar to Mary Magdalene, he said. “This was probably a clue that I’m going to find something or something’s going to happen,” Bishop, 55, recently recalled from his Brockton home. “I didn’t know until now what it was.” Bishop claims he has since discovered something crucial to religious history — a stained glass window in a stone room in France that depicts locking rods on the Arc of the Covenant, which is described in the Bible as a sacred container holding the Ten Commandments. Bishop said the locking rods are on the list of treasures of Solomon’s Temple that are on the Copper Scroll, one of the Dead Sea Scrolls, several hundred religious documents found near the Dead Sea in 1947. Religious historians “have never found any of this stuff,” Bishop said of the stained glass depicting the locking rods. “I spoke to professors, rabbis, art historians and they’re all stumped. They’ve never seen it before.” Bishop said he discovered the stained glass while visiting southwestern France in 2004. He said the stained glass is located in a stone room in a French cloister circa 1540-1560 A.D. near Rennes-le-Chateau, a small medieval castle village that receives thousands of visitors each year and considered the center of various conspiracy theories. The village gained international fame after it became the origin for religious hypotheses in the bestselling books “The Holy Blood” and the “Holy Grail” and “The DaVinci Code.” In the fictional DaVinci Code, author Dan Brown points to the possibility of Jesus having been married to and fathered a child with Mary Magdalene. Bishop said he began researching the connection between Jesus and Mary Magdalene, and read several books on the subject, in 1999, after he retired and before “The DaVinci Code” was published. "Dan Brown is all conjecture," Bishop said of the book’s author. “This is factual.” Bishop said he started writing his own book on the subject two years ago. “It’s a work in progress,” he said. He claims that he has “solved the mystery” of Rennes-le-Chateau by researching tombstones and other historical symbols in the French region. “I have an idea of where everything is buried,” he said of the treasures of Solomon’s Temple. “I’m on a lead to where the items are buried.” He said he is trying “to get backing” on his historical project from National Geographic and the History Channel. Bishop said he was one of the firefighters who responded to the terrorist attacks in New York on Sept. 11, 2001. “I knew 150 of the firefighters who died,” he said. A divorced father of three, Bishop said he moved to Brockton in 2006 to live with his fiance, Lynn. He believes that he was destined to make a great discovery in France, one that the Brooklyn, N.Y., native plans to share with the world. “Why me? I don’t know. Because I went searching, that’s why,” Bishop said. “If you think outside the box, you see a little more than everybody else does.”
**************************************
"Why me? ...Because I went searching... ." Yeah, as if nobody else has ever gone searching for buried treasure, hidden Templar underground chambers, the grave of Mary Magdalene, etc. etc., in this region of France.
Posted by Jan at 1:41 PM