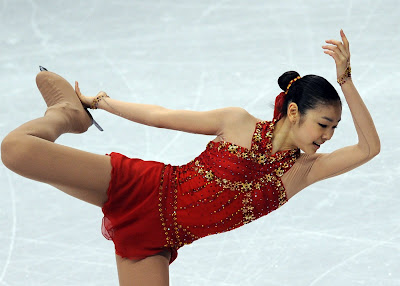 I was too tired to blog about it last night. Yu Na of South Korea won the women's title in spectacular style. (Photo: Kim Yu Na, by Gabriel Bouys/AFP/Getty Images/March 28, 2009) At times as she was skating, she reminded me very much of a younger Michelle Kwan, the same artistry and projection of emotion, being one with the music - and with fab technical skills. Joannie Rochette of Canada finished in second, Canada's second ladie's medal - not having scored one since Liz Manley (one of commentator Dick Button's all-time favorites, I think) won a silver for Canada in 1988! I thought Rochette skated just fine, but I thought she was outshown by Yu Na and Japan's Miki Ando (who won the women's world title in 2007), who took the bronze. Ando scored higher in the free skate than Rochette, but Rochette's combined scores were higher than Ando's to maintain her second place position. Mao Asada (last year's Women's World champion) finished in 4th place after falling on an attempted second triple axle. Her program was otherwise superbly skated but she was punished for the fall, not rewarded for the attempt at the second triple axle. American Rachael Flat, at sweet 16, finished in a highly respectable 5th place, while U.S. Women's champ Alissa Czisny was 11th. I did not see her long program, but it was creditable enough to move her up from 14th to 11th overall. Not bad, considering that her short program was disastrous. Rachelle Flat leaves me flat, I do not find her presence on the ice inspiring. I much prefer Czisny's style of skating, but she is so inconsistent. And who knows if she will make it to the 2010 Olympics. I don't know the dates for those Olympics, but there may be a 2010 U.S. Skating Championships beforehand, and there are plenty of younger skaters gunning for Czisny's title. Michelle Kwan, looking drop dead gorgeous, did some commentary on network television last night, and she was asked about a possible comeback for the 2010 Olympics. She said she was skating again and working to get back in shape, but she had no definite plans for a come-back. If she did come back, she would be 28, and she would have to make the U.S. skating team. Twenty-eight is young in the real world, but in the world of women's figure skating, that's senior statesman age! Still, there was at least one skater last night who was 28, and I thought she skated just fine, but was marked too low. Even with the new-fangled scoring system which no one understands and where no one sees the individual judges' scores anymore, there is plenty of room for subjective judgment and, therefore, cheating. It will always be so in such a blend of sport and art as figure-skating. The other thing that the new scoring system has led to is a checklist approach to scoring points throughout a program for technical elements, and it was quite evident in program after program last night that this has led to a great similarity in what goes into programs and how the programs are put together. BORING! Coverage: Chicago Tribune Toronto Star The Seoul Times Queen Kim new queen of figure skating, story by Nancy Armour, Associated Press (reported in many newspapers under various titles)
Posted by Jan at 2:55 PM