From Eye of Horus to 'Rx' 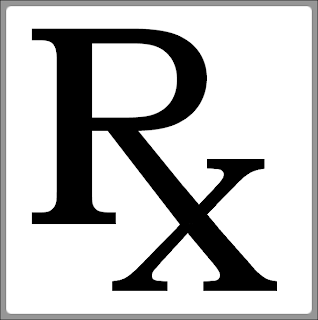 Article from VOA.com (Voice of English) Take This Medicine: The Story of the Sign 'Rx' How a special sign came to mean a doctor’s prescription. Transcript of radio broadcast: 21 March 2009 Now, the VOA Special English program, WORDS AND THEIR STORIES. Every week at this time, the Voice of America tells about popular words and expressions used in the United States. Some of these words and expressions are old. Some are new. Together, they form the living speech of the American people. Our story today is very old. It goes back about five-thousand years. It is about a sign that is used to represent some words. We see this sign on drug stores and whenever we visit a doctor to get an order for medicine. It also appears on bottles of pills and other medicines. The sign is formed by a line across the right foot of the letter "R." It represents the word "prescription." It has come to mean "take this medicine." The sign has its beginnings five thousand years ago in Egypt. At that time, people prayed to Horus, the god of the Sun. It was said that when Horus was a child, he was attacked by Seth, the demon of evil. The evil Seth put out the eye of the young Horus. The mother of Horus called for help. Her cry was answered by Thoth, the god of learning and magic. Thoth, with his wisdom and special powers, healed the eye of Horus. And the child was able to see again. The ancient Egyptians used a drawing of the eye of Horus as a magic sign to protect themselves from disease, suffering and evil. They cut this sign in the stones they used for buildings. And it was painted on the papyrus rolls used for writing about medicine and doctors. For thousands of years, the eye of Horus remained as a sign of the god's help to the suffering and sick. Long after the fall of the ancient Egyptian civilization, doctors and alchemists in Europe continued the custom of showing a sign of the gods' help and protection. But over the years, the sign changed from the eye of Horus to the sign for Jupiter, the chief god of the Romans. Jupiter's sign looked much like the printed number "four." That sign changed, also. Today, it is the easily-recognized capital "R" with a line across its foot. The sign no longer offers heavenly assistance to the sick. It now means "take this medicine." This VOA Special English program WORDS AND THEIR STORIES was written by Frank Beardsley. The narrator was Maurice Joyce. I'm Warren Sheer.
Posted by Jan at 9:44 PM