The Queen and Mrs. Obama 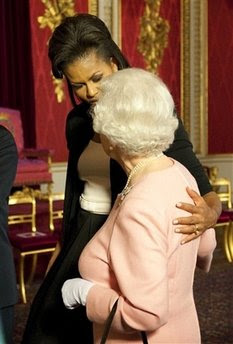 Michelle Obama charms queen away from protocol From A.P. By JENNIFER QUINN, Associated Press Writer Jennifer Quinn, Associated Press Writer – Thu Apr 2, 2:15 pm ET
LONDON – Michelle Obama's meeting with Queen Elizabeth II began with a handshake and ended in a hug. The first lady arrived Wednesday with President Barack Obama. After separate meetings on the eve of the G-20 summit, the couple attended an evening reception for world leaders hosted by the queen. Mrs. Obama clearly made an impression with the 82-year-old monarch — so much that the smiling queen strayed slightly from protocol and briefly wrapped her arm around the first lady in a rare public show of affection. It was the first time Mrs. Obama — who is nearly a foot taller — had met the queen. The first lady also wrapped her arm around the monarch's shoulder and back. A Buckingham Palace spokesman who asked not to be identified because of palace policy said he could not remember the last time the queen had displayed such public affection with a first lady or dignitary. "It was a mutual and spontaneous display of affection," he said. "We don't issue instructions on not touching the queen." When the former Australian Prime Minister Paul Keating put his arm around the queen in 1992, the tabloids dubbed him the "Lizard of Oz." When his successor, John Howard, was accused of doing the same, a spokesman insisted: "We firmly deny that there was any contact whatsoever." In 2007, President George W. Bush gave the queen a sly wink during a visit she paid to the United States. The Daily Mail said the "two women clearly took to each other." Wednesday's reception was followed by a dinner at Prime Minister Gordon Brown's Downing Street home, where the leaders' spouses were joined by notable British women, including "Harry Potter" author J.K. Rowling and Olympic gold medal runner Kelly Holmes. "Michelle walks in and she is as she seems," Holmes told reporters Thursday. "So warm, engaging, a beautiful, beautiful lady — and I quickly got my photo in the middle of her and Sarah Brown," the prime minister's wife. Mrs. Obama also seemed to win over the often feral British press. The last time a first lady made such a hit in Britain was last year with French President Nicolas Sarkozy's wife, the former fashion model and songwriter Carla Bruni. But on Thursday, London's Times newspaper had moved on, writing "Carla who?" The BBC described Mrs. Obama as her husband's co-star rather than supporting act — appropriate for a Harvard-educated lawyer. Mrs. Obama visited an all-girls school in north London on Thursday afternoon. She told the 240 girls about growing up on Chicago's south side, and urged them to think of education as "cool." "I never cut class. I liked being smart. I liked getting A's," she said. "You have everything you need. Everything you need to succeed you already have right here." At the end of the visit, Mrs. Obama doled out hugs to the students, and was swarmed by them — to the extent that some Secret Service agents stepped nervously forward. Earlier Thursday, Mrs. Obama attended a performance at the Royal Opera House with the other spouses and guests. The program included music by Handel and a dance performance by Ballet Black, a troupe set up to give performing opportunities to black and Asian classical dancers. Wearing a bright teal blue dress by Jason Wu — who designed her inauguration gown — and a sweater by Junya Watanabe, Mrs. Obama posed for photographs with Sarah Brown, Therese Rein, wife of Australian Prime Minister Kevin Rudd, Japanese Prime Minister Taro Aso's wife Chikako Aso, and Laureen Harper, who is married to Canadian Prime Minister Stephen Harper, on the stage of the opera house. ************************************************************************** I have great admiration for both of these very cool ladies ladies - so different, and yet so alike too. In watching the video (see link above and take a look at the third video down on the left side of the page), it's clear that it was the Queen who, in a spontaneous and unguarded moment, first put her arm around Mrs. Obama's waist! Lovely! And then Mrs. Obama reciprocated and the two ladies shared a look, a word, and a laugh. It was all over in a few seconds, but with today's ever-present video cams, etc., the moment was captured in time forever. The Queen is about my mom's age. I was born the same year Queen Elizabeth II ascended to the throne (1951). It just awes me how much the world has changed since that time - how much I've seen in my 57 years (soon to be 58 - in August) and how much much more the Queen and my mom have seen in their lifetimes. Sometimes, when I think about how it was when I was a child, it seems like we're now living on a different planet! How much more so must that feeling be for my mom - and the Queen.
Posted by Jan at 7:03 PM