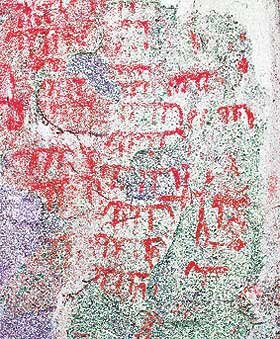 (Image: Herd of horses, Anatolia, circa 6,000 BCE) Hmmm, I don't think so, and I'll tell you why at the end of this article, from Science Daily: ScienceDaily (Apr. 24, 2009) — Wild horses were domesticated in the Ponto-Caspian steppe region (today Russia, Kazakhstan, Ukraine, Romania) in the 3rd millennium B.C. Despite the pivotal role horses have played in the history of human societies, the process of their domestication is not well understood. In a new study published in the scientific journal Science, an analysis by German researchers from the Leibniz Institute for Zoo and Wildlife Research, Berlin, the German Archaeological Institute, the Humboldt University Berlin, the Max Planck Institute of Evolutionary Anthropology, Leipzig, in cooperation with American and Spanish scientists, has unravelled the mystery about the domestication of the horse. Based on ancient DNA spanning the time between the Late Pleistocene and the Middle Ages, targeting nuclear genes responsible for coat colorations allows to shed light on the timing and place of horse domestication. Furthermore the study demonstrates how rapid the number of colorations increased as one result of the domestication. As well, it shows very clearly that the huge variability of coloration in domestic horses which can be observed today is a result of selective breeding by ancient farmers. Our modern human societies were founded on the Neolithic revolution, which was the transformation of wild plants and animals into domestic ones available for human nutrition. Within all domestic animals, no other species has had such a significant impact on the warfare, transportation and communication capabilities of human societies as the horse. For many millennia, horses were linked to human history changing societies on a continent-wide scale, be it with Alexander the Great’s or Genghis Khan’s armies invading most of Asia and Eastern Europe or Francis Pizarro destroying the Inca Empire with about 30 mounted warriors. The horse was a costly and prestigious animal in all times, featured in gifts from one sovereign to another as a nobleman’s mark. Journal reference: Arne Ludwig, Melanie Pruvost, Monika Reissmann, Norbert Benecke, Gudrun A. Brockmann, Pedro Castaños, Michael Cieslak, Sebastian Lippold, Laura Llorente, Anna-Sapfo Malaspinas, Montgomery Slatkin, and Michael Hofreiter. Coat Color Variation at the Beginning of Horse Domestication. Science, 2009; 324 (5926): 485 DOI: 10.1126/science.1172750 Adapted from materials provided by Forschungsverbund Berlin e.V. (FVB), via AlphaGalileo.
****************************************************
I believe the 3rd millennium BCE is too late for domestication of the horse. Right on the same page the above-referenced article appeared is a link to a Science Daily article from March 6, 2009 (Archaeologists Find Earliest Known Domestic Horses: Harnessed and Milked), in which well-researched archaeological evidence indicates that horses were first domesticated by the "Botai Culture of Kazakhstan circa 5,500 years ago. This is about 1,000 years earlier than thought and about 2,000 years earlier than domestic horses are known to have been in Europe. Their findings strongly suggest that horses were originally domesticated, not just for riding, but also to provide food, including milk." This earlier date (c. 5,500 years ago) is confirmed by another Science Daily article from November 3, 2006: New Evidence Of Early Horse Domestication, which points to a date of approximately 5,600 years ago.
Posted by Jan at 2:04 PM