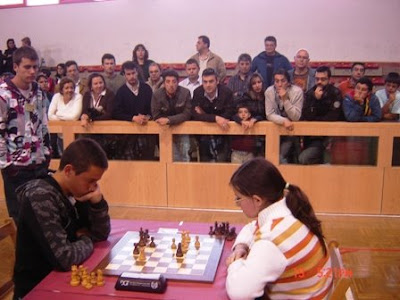 (Photo: Round 7, María Crespo and Alejandro Galán attract a crowd of onlookers) Goddesschess receives it's share of mail, as I suspect most chess-related websites do. A few days ago we received an unsolicited email report about a tournament held in Spain. Unfortunately for us, it was entirely in Spanish, a language which none of us speaks! However, with the aid of the many photographs provided at the website of the Club Ateneo Cacereno de Ajedrez and a rough (very rough) Babel Fish translation, I was able to use my incredible powers of deductive reasoning to conclude that it was a report about the V Edicion Torneo San Jorge de Ajedrez scholastic chess event held in Cáceres, Spain, on April 19, 2009. There were 166 participants, although 204(?)registered. The photographs tell the entire story of the event, from start to finish. First, the Club gets its first sight of the venue; then there is all of the hard work to get the space ready for the tournament. The hard-working volunteers from the Ateneo Cacereno Chess Club set up the many tables, chairs and chess sets needed to host such a large event and prepare the site for the tournament. Next, there are photographs of the action as the tournament unfolded, and photographs of the awards ceremony at the end. I was enchanted! Here are the top finishers of the female partipants and the prizes they won: 1º María Crespo (Trofeo + Caja selección Alimentos Extremadura + Fritz 11) 2º Ana Martín Mora Muñoz (Trofeo + Libro ajedrez) 3º Clara Gallego Sosa (Tablero ajedrez y piezas) 4º Irene Valle González (Tablero ajedrez y piezas) 5º Marta Martín Morientes (Tablero ajedrez y piezas) The Club Ateneo Cacereno de Ajedrez is already planning for a bigger and better event next year! Congratulations to all of the winners and participants in the 2009 event, and to all of the people who made it possible with their dedication and hard work. I wish you much success in 2010!
Posted by Jan at 10:24 PM