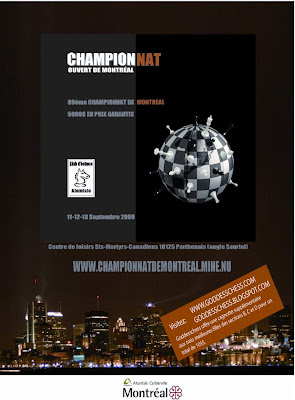 a/k/a Championnat de Montreal (2009) Prior post Next weekend! September 11 - 13, 2009. This year the organizers have made a special effort to reach out to the chess femmes in the community and abroad, and have had good success! First, efforts to attract a WGM to play in the Open were successful! WGM Salome Melia (GEO 2441), ranked 44th in the world of active female players, is coming all the way from Europe to participate in the Open. Goddesschess was pleased to provide financial support for this endeavor. At this moment, Melia is the 2nd ranked player in the Open. Second, the Open has lured Zahira El Ghaby (2050 - I do not know under which flag she will be playing) out of inactivity! Now living in Beaumont, Quebec, Canada, she is a two-time Female Champion of Morocco (2002, 2003), Arabian Champion U-18 (2001), and a Chess Olympiad gold medalist (Instanbul, 2000), scoring 6.5/7 and a 92.9% win ratio to earn her Gold. She represents a dangerous unknown! Third, Kelly Wang (CAN 1580), who is 9 years old and entering Grade 4 this year in school, is playing. Thus far, she is the highest-rated chess femme in the B Group and has a good shot at winning the Goddesschess prize for chess femmes in that group. Also playing in the B Group is 12th-grader Marguerite Yang (CAN 1317). In the C Group, Mei Chen Lei (CAN 1516) is coming from Toronto to play. She is friends with WGM Meenakshi Subarraman who had planned to play in the Championship, but lost employer financial support due to global economic conditions and, therefore, will not be appearing in 2009. But both players are scheduled for the 2010 Championship! These are some of chess femmes who will be competing for the title "Female Champion of Montreal" this year! Stay tuned! We are still hoping for more chess femmes. The organizers have reduced registration fees for all chess femmes by $10 as an inducement for more chess femmes to come out and play. The organizers have also waived registration fees for all Chess 'n Math players as long as they don't have a long game rating with FQE or other Federations. Goddesschess' own Don McLean will be on-site throughout the Tournament taking photos, video, and interviews with as many chess femmes who will talk to him! We will publish everything at the Goddesschess blog and/or website. At the conclusion of the Tournament, Monsieur McLean (a Montreal native) will hand out the monetary prizes and certificates to the chess femmes who have won the Goddesschess class prizes. Please come out and support this historical Montreal Tournament. We hope to see you there!
Posted by Jan at 1:27 PM