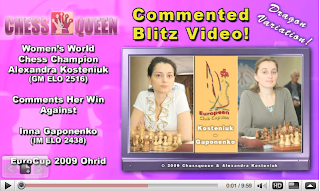 I am behind the times in reporting on this event, in which several women's teams composed of the brightest star female chessplayers from around the world competed. I will post more this weekend. For the past two years the club sponsored by Monte Carlo won the gold medal, and with the line-up of players the 2009 version of Monte Carlo fronted, I expect many spectators, myself included, assumed they would once again take home the gold. That was not to be -- Monte Carlo took home silver this year. But in case the link embedded in the image doesn't work (I've had the devil of a time trying to get it right) check out this annotated video of current Women's World Chess Champion GM Alexandra Kosteniuk, who played for Monte Carlo, win against IM Inna Gaponenko.
Posted by Jan at 9:49 PM