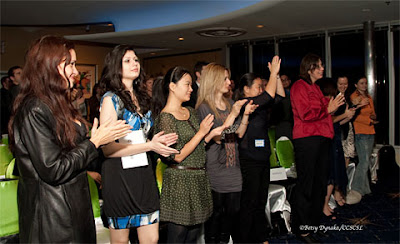 Chessbase presents photographs from Round 9 and the closing party featuring, of course, gorgeous chess femmes and some rather - well - let's just say some chess guys. Photo caption: The ladies applaud the announcement that there will be a repeat in 2010. Really? Was an announcement made at the awards ceremony about the Chess Club and Scholastic Center of St. Louis hosting the 2010 USWCC? This was obviously a different event because the ladies have different outfits on from what they wore in the party party party photos. You can see Betsy Dynako's photographs of the event at the 2009 U.S. Women's Chess Championship at the official website. Updated 3:16 p.m. October 17, 2009: It is confirmed from the USCF website (Chess Life Online) that the 2010 U.S. Women's Chess Championship will, indeed, be played at the same venue as in 2009. Hooray!
Posted by Jan at 12:48 PM