Check out this article of Roger Penrose at Discover Magazine online. There is some fascinating discussion on quantum physics - oh, I know I know, sounds horridly boring. But it's not! Great stuff. Penrose has the bullocks to say that current quantum theory is all wrong because, as I understand what he's saying, it cannot account for what humans actually see and experience as existence. He expects it is some mechanism that is elegantly simple, and that the universe and the human brain run on the same principles. Wow! Penrose comes from a tremendously accomplished and achieving family. His younger brother, Jonathan Penrose (a psychiatrist), was British Chess Champion 10 times, between 1958 and 1969. From Discover Magazine online
Discover Interview
Roger Penrose Says Physics Is Wrong, From String Theory to Quantum Mechanics One of the greatest thinkers in physics says the human brain—and the universe itself—must function according to some theory we haven't yet discovered. by Susan Kruglinski; photography by Oliver Chanarin From the September 2009 issue, published online October 6, 2009 Here are some parts of the interview: So I assume your father helped spark your discovery of Penrose tiles, repeating shapes that fit together to form a solid surface with pentagonal symmetry. It was silly in a way. I remember asking him—I was around 9 years old—about whether you could fit regular hexagons together and make it round like a sphere. And he said, “No, no, you can’t do that, but you can do it with pentagons,” which was a surprise to me. He showed me how to make polyhedra, and so I got started on that. Are Penrose tiles useful or just beautiful? My interest in the tiles has to do with the idea of a universe controlled by very simple forces, even though we see complications all over the place. The tilings follow conventional rules to make complicated patterns. It was an attempt to see how the complicated could be satisfied by very simple rules that reflect what we see in the world. 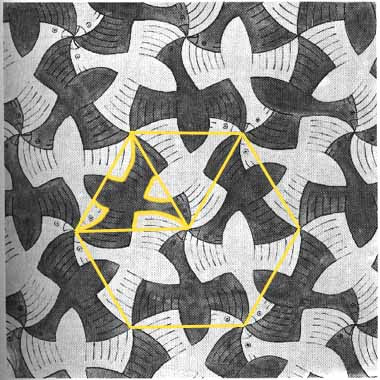 The artist M. C. Escher was influenced by your geometric inventions. What was the story there? In my second year as a graduate student at Cambridge, I attended the International Congress of Mathematicians in Amsterdam. I remember seeing one of the lecturers there I knew quite well, and he had this catalog. On the front of it was the Escher picture Day and Night, the one with birds going in opposite directions. The scenery is nighttime on one side and daytime on the other. I remember being intrigued by this, and I asked him where he got it. He said, “Oh, well, there’s an exhibition you might be interested in of some artist called Escher.” So I went and was very taken by these very weird and wonderful things that I’d never seen anything like. I decided to try and draw some impossible scenes myself and came up with this thing that’s referred to as a tri-bar. It’s a triangle that looks like a three-dimensional object, but actually it’s impossible for it to be three-dimensional. I showed it to my father and he worked out some impossible buildings and things. Then we published an article in the British Journal of Psychology on this stuff and acknowledged Escher. Escher saw the article and was inspired by it? He used two things from the article. One was the tri-bar, used in his lithograph called Waterfall. Another was the impossible staircase, which my father had worked on and designed. Escher used it in Ascending and Descending, with monks going round and round the stairs. I met Escher once, and I gave him some tiles that will make a repeating pattern, but not until you’ve got 12 of them fitted together. He did this, and then he wrote to me and asked me how it was done—what was it based on? So I showed him a kind of bird shape that did this, and he incorporated it into what I believe is the last picture he ever produced, called Ghosts.
I left out the real meat of the article so you can enjoy reading it for yourself!
Further information on tessellations (and image from) Totally Tessellated (a Thinkquest project). Ironically, the image above shows a superimposed hexagon (six-sided figure of equal sides) as being the basis for Escher's tessellated pattern.
Of course, those famous Las Vegas Showgirls, Bambi and Candi, wrote quite an article on tessellations and chess and Escher back in 2003, oooohhh!
Posted by Jan at 7:41 PM