I Have Found Tatjana Plachkinova!

Hola everyone! Ever since June, 2009, I have been looking for Tatjana, whom I fondly remembered as a young female chessplayer from Bulgaria that I "met" online through IM Ricardo Calvo (rest his soul). While my first independent website called Chessgoddesses.com was online (2001 to sometime in 2004), Tatjana periodically provided me with reports of the tournaments she was playing in and also annotated some of her games. Tatjana, along with Shira Evans reporting states-side, were two chess femmes who made my flegdling site Chessgoddesses.com very popular at the time. It is hard to remember now, because I took Chessgoddessess offline sometime in 2004, and I deleted all of my files related to that website. Really dumb - yes, I know! I deleted the photographs I had, and all of TJ's reports -- I think there were about six or seven, in all. This blogpost started my hunt for Shira Evans and Tatjana Plachkinova. I didn't write about it here, but after I located Shira and re-established contact with her, I continued to hunt for Tatjana Plachinova. The only problem was - I was not spelling her name correctly! DUH! 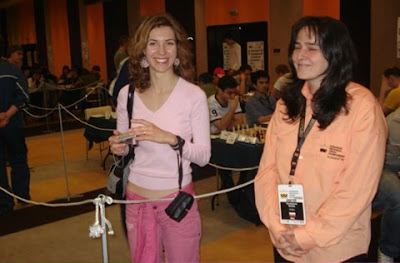