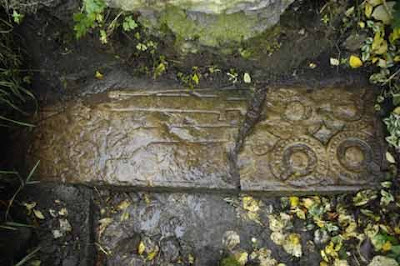 Oh no - at the very end of this article, they mention an old legend about buried treasure. Now that this tombstone(?) or sarcophogus(?) cover has been found, you know what's bound to happen - hordes of treasure hunters will descend upon this site, and they're probably not going to be signing up and staying at the local inn and shopping in the local village shops! From the News.scotsman.com Mystery stone found near church linked to Knights Templar Published Date: 27 October 2009 By CLAIRE SMITH A MYSTERIOUS carved stone has been uncovered alongside a 12th-century church associated with the Knights Templar. The stone has been dated to the 12th century. Pictures: Kate Chandler What appears to be the carved top of a sarcophagus was unearthed when builders were excavating and reinforcing a wall alongside the old ruined church in Temple, Midlothian. But the inscriptions, which include symbols similar to those found in Viking monuments, in medieval graves and in West Highland Celtic carvings, have baffled archaeologists. Crispin Phillips, who is renovating a house alongside The Old Parish Church, said: "I was on a mission to repair the wall – which was falling into the graveyard. We got near the bottom of the foundations and found something buried there. "We found one stone carved with a cross and then another with these carvings on it." He added: "We spent about half an hour in philosophical discussions about what we should do about it. I felt we should do something, rather than just bury it again." Mr Phillips contacted Historic Scotland and East Lothian Council, whose archaeologists cover Midlothian. He said the stone had been photographed and recorded but he was still unclear whether further investigations would be carried out. "One of the archaeologists who came out told us it was probably from the early 12th century," he added. "But really I'm still in limbo about what to do about it." Historian and author John Ritchie said the stone raised many questions. "It is a crude carving, quite primitive, but I have never seen anything like it in my life," he said. "It has a whole series of symbols on it and the symbols are very interesting." The symbols at the bottom look like Viking sun compasses, while the dials at the top look a little bit like a Celtic cross but with notches carved on them. Expert David Connolly, of Connolly Heritage Consultancy, said he believed the stone was from the 13th or 14th century. "It is a significant site because it was the Templar Preceptory for Scotland," he said. "I think from the condition, it may once have been set inside the church – which was once much bigger," he added. "He could be a Templar, he could be a Hospitaller, he could just be a knight who wanted to be buried there – but the heraldry is like nothing anyone has seen before." He added that he hoped further study of the stone was possible in the future. Mr Phillips said he planned to complete the rebuilding of the 17th-century graveyard wall and would build an arch into it so the half-buried carvings could still be seen by interested scholars. However historian and author Michael Turnbull said he doubted the find was significant: "There were certainly Templars there but this might be a fake." Village legend tells of long-lost buried treasure THE village of Temple in Midlothian takes its name from the Knights Templar, who once had their Scottish Preceptory – their headquarters – there. The ruined chapel, which nestles in the valley at the foot of the village, is all that remains of what was once an abbey founded by the Templars on lands gifted by David I of Scotland in 1127. Founded during the Crusades, the Templars was a religious order of knights whose mission was to protect Christians in the Holy Land.Some say they invented international banking, with a system of credit letters used to pass funds to people fighting in the Crusades. The Templars certainly grew rich and powerful. According to some accounts they were the holders of treasures from Jerusalem. But the organisation came under suspicion from the royalty of Europe and the Catholic Church. Templars were hunted down and burned at the stake. Legend has it some of those fleeing persecution hid in this Midlothian village – bringing their treasure with them. According to local legend some of this treasure still lies buried in Temple: "Twixt the oak and the elm tree/You will find buried the millions free."
Posted by Jan at 8:06 PM