DNA Study of Dogs Points to Domestication in the Middle East

I thought I may have posted the earlier article from September, 2009, about a DNA study indicating that dogs were first domesticated in southern China - to be used as food!  Oh Goddess!  I think I was so appalled by the thought that I didn't post it, because I could not find a link anywhere in this blog to the story.  But here is a sampling of the coverage at the time the story of dog-as-food-in-ancient-China first broke:
Dogs First Tamed in China -- To Be Food?
John Roach for National Geographic News
September 4, 2009

In Taming Dogs, Humans May Have Sought a Meal
The New York Times
By NICHOLAS WADE
Published: September 7, 2009

It seems, however, that there may have been an intermediary intermingling of already domesticated dogs that travelled from the Middle East into China with the local wolves, the offspring of which were then re-domesticated by the Chinese - for food!  Oh Goddess.

Well, I know, I know, different cultures and all that.  But - ohmygoddess!

Here is the story about this new DNA study regarding domestication of the dog: 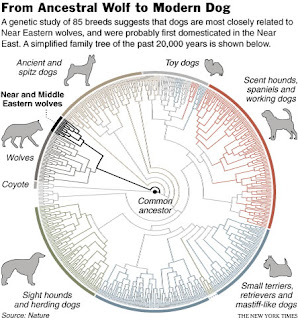 Borrowing methods developed to study the genetics of human disease, researchers have concluded that dogs were probably first domesticated from wolves somewhere in the Middle East, in contrast to an earlier survey suggesting dogs originated in East Asia.

This finding puts the first known domestication — that of dogs — in the same place as the domestication of plants and other animals, and strengthens the link between the first animal to enter human society and the subsequent invention of agriculture about 10,000 years ago.

A Middle Eastern origin for the dog also fits in better with the archaeological evidence, and has enabled geneticists to reconstruct the entire history of the dog, from the first association between wolves and hunter gatherers some 20,000 years ago to the creation by Victorian dog fanciers of many of today’s breeds.

A research team led by Bridgett M. vonHoldt and Robert K. Wayne of the University of California, Los Angeles, has analyzed a large collection of wolf and dog genomes from around the world. Scanning for similar runs of DNA, the researchers found that the Middle East was where wolf and dog genomes were most similar, although there was another area of overlap between East Asian wolves and dogs. Wolves were probably first domesticated in the Middle East, but after dogs had spread to East Asia there was a crossbreeding that injected more wolf genes into the dog genome, the researchers conclude in Thursday’s issue of the journal Nature.

The archaeological evidence supports this idea, since some of the earliest dog remains have been found in the Middle East, dating from 12,000 years ago. The only earlier doglike remains occur in Belgium, at a site 31,000 years old, and in western Russia from 15,000 years ago.

Humans lived as roaming hunters and gatherers for most of their existence. Dr. Wayne believes that wolves began following hunter-gatherer bands to feed on the wounded prey, carcasses or other refuse. At some stage a group of wolves, who happened to be smaller and less threatening than most, developed a dependency on human groups, and may in return have provided a warning system.

Several thousand years later, in the first settled communities that began to appear in the Middle East 15,000 years ago, people began intervening in the breeding patterns of their camp followers, turning them into the first proto-dogs. One of the features they selected was small size, continuing the downsizing of the wolf body plan. “I think a long history such as that would explain how a large carnivore, which can eat you, eventually became stably incorporated in human society,” Dr. Wayne said.

The wolf DNA in the study was collected over many years by Dr. Wayne from wolf packs around the world. A colleague, Elaine Ostrander, gathered much of the dog DNA by persuading owners at dog shows to let her take a scraping of cells from inside the cheek. The dog genome has been decoded twice: scientists at the Broad Institute in Cambridge, Mass., have sequenced the boxer’s genome, and Craig Venter, a pioneer of DNA sequencing, has decoded his poodle’s genome.

With these two genomes in hand, the Broad Institute designed a dog SNP chip, similar to those used to scan the human for genetic disease. SNPs, or “snips,” are sites of common variation along the DNA. Affymetrix, a SNP chip maker, manufactured the dog SNP chip for Dr. Wayne’s team, letting him have 1,000 chips free, though thereafter they cost $250 apiece. The dog SNP chip brought to light the close relationship between dogs and wolves in the Middle East and also the genetic relationship between various breeds.

Dr. Wayne was surprised to find that all the herding dogs grouped together, as did all the sight hounds and the scent hounds, making a perfect match between dogs’ various functions and the branches on the genetic tree. “I thought there would be many ways to build a herding dog and that they’d come from all over the tree, but there are not,” Dr. Wayne said.

His team has also used the dog SNP chip to scan for genes that show signatures of selection. One such favored dog gene has a human counterpart that has been implicated in Williams syndrome, where it causes exceptional gregariousness. Another two selected genes are involved in memory. Dogs, unlike wolves, are adept at taking cues from human body language, and the two genes could have something to do with this faculty, Dr. Wayne said.

An earlier survey of dog origins, based on a small genetic element known as mitochondrial DNA, concluded that dogs had been domesticated, probably just once, in East Asia. The author of the survey, Peter Savolainen of the Royal Institute of Technology in Stockholm, said he was not convinced by the new report for several reasons, including that it did not sample dogs in East Asia from south of the Yangtze, the region where the diversity of mitochondrial DNA is highest. Also archaeologists in China have been less interested in distinguishing dog and wolf remains, he said.

Two other experts on dog genetics, Carlos Driscoll and Stephen O’Brien, of the National Cancer Institute, said they believed that Dr. Wayne’s team had made a convincing case. “I think they have nailed the locale of dog domestication to the Middle East,” Dr. O’Brien said in an e-mail message from Siberia, where he is attending a tiger management workshop.

Dog domestication and human settlement occurred at the same time, some 15,000 years ago, raising the possibility that dogs may have had a complex impact on the structure of human society. Dogs could have been the sentries that let hunter gatherers settle without fear of surprise attack. They may also have been the first major item of inherited wealth, preceding cattle, and so could have laid the foundations for the gradations of wealth and social hierarchy that differentiated settled groups from the egalitarianism of their hunter-gatherer predecessors. Notions of inheritance and ownership, Dr. Driscoll said, may have been prompted by the first dogs to permeate human society, laying an unexpected track from wolf to wealth.
Posted by Jan at 8:32 PM

If you think about it...