It Was Big News When Lisa Lane Was In Love

I just happened across a link to a blast from the past earlier today when I was looking for the latest chess news.  Lisa Lane was U.S. Women's Chess Champion in 1959, 1960 and co-champion with Gisela Gresser in 1966, and was one of the best female chessplayers of her day. 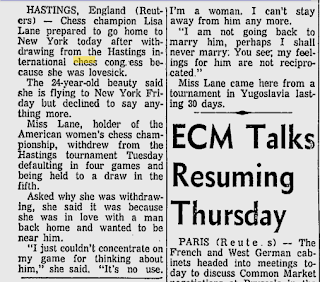 I cropped this article from google news.  It was published in The Calgary Herald on January 3, 1962.  The page contains links to three other archived newspaper articles on the same subject from the same time period (January 3-5, 1962).

Lane seemed surprised that her reason for withdrawing from Hastings was deemed newsworthy:  I would rather not answer any more questions.  There has been an awful lot of publicity that I really did not want.  Ottawa Citizen, January 4, 1962.

Keep in mind that Lisa Lane evidently never learned how to deal well with losing chess games (I can sympathize).  After going through a grueling candidates' tournament in Yugoslavia at the end of 1961 (30 days worth of chess) and then going right to Hastings, she was worn out and pissed off about her results in Yugoslavia.  Hastings wasn't going well. I'll bet she was saying to herself what the hell am I doing here playing this silly-ass game for peanuts when everything I want it back in New York?   She wasn't the first young chessplayer to think moving on away from chess might be the best thing to do -- GM-elect Sam Shankland made an emotional announcement some months back that he was going to quit chess too  -- and then he went on to earn his final GM norm (it needs only to be formally acknowledged by FIDE, the international chess federation, at its next quarterly meeting) and he made it into the final four of this year's U.S. Chess Championship.

So, what happened?  Did Lisa Lane ever get together with the man she so publicly admitted to loving?
This Wikipedia article says that Lisa Lane did, indeed, marry Neil Hickey - in 1962.  She quit playing chess after the 1966 U.S. Women's Chess Championship and, as far as I know, hasn't played a game in competition since.  Lane, still married to Neil Hickey at the time, gave a telephone interview to Jennifer Shahade when Shahade was preparing her book Chess Bitch for publication (2005).  Lane didn't have any regrets about walking away from chess, though at the time she still closely followed the women in the game.

Lane walked away from chess, but Shahade writes "Lisa Lane had a relatively short career on the professional circuit, but her wild ways, tough-luck history, and glamorous lifestyle made an impression on girls and women who read about her in the press."
Posted by Jan at 10:01 PM